Making the Point for Us: Tropes vs Women In Video Games WTFKery 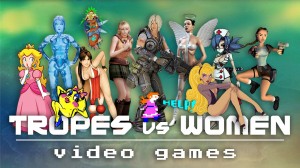 I almost didn’t get around to posting today – after all, copy edits needed to be handed in and the Guild Wars 2 Beta is live and that’s what I’ll be running off to do in a bit.

However, I did want to mention the Kickstarter project by Anita Sarkeesian: Tropes vs Women in Video Games. The idea is fairly broad and fascinating – but simply put, she plans on doing a series of videos based on the way women are portrayed in video games. (Which I ranted about a bit earlier this week.)

I love playing video games but I’m regularly disappointed in the limited and limiting ways women are represented.  This video project will explore, analyze and deconstruct some of the most common tropes and stereotypes of female characters in games.  The series will highlight the larger reoccurring patterns and conventions used within the gaming industry rather than just focusing on the worst offenders.  I’m going to need your help to make it happen!

I was pretty much an instant contributor based on that fact alone – simply because I do think it’s a great thing to investigate further. Will I agree with everything she says? Who knows – but I do support the research because I know for a fact there is a massive issue between genders and gaming and the way women are perceived both in games and in playing the games.  (And having experienced some of that first hand, it can be pretty awful at time.)

Now, the thing is – you may feel that there is no issue. You may feel this is a dumb project or a waste of time and money. And that’s fine. Don’t like it? Don’t contribute. There’s tons of stuff you can spend your money on or not. No one is holding a gun to your head.

So why all the hatred? If you can gird your mental loins for a moment to check out the long, long list of misogynistic wtfkry on this woman’s you tube page, I strongly suggest you do. The knee-jerk reactions including calling her a Jew, a cunt, hoping she gets cancer, telling her to get back in the kitchen, telling her to play something called Rapelay, etc. (I’m sure that was just bullshit, but hey – Kickstarter just pulled the plug on another project called Tentacle Bento, which is a card game where the object is to find high school girls and rape them with your tentacles. Yes, there it is, folks – gamers at work.)

I don’t know what it is about the internet that gives anonymous trolls such a vile case of diarrhea mouth, but THIS is exactly the sort of shit women gamers face in the gaming industry ALL THE TIME.  And the thing is – it’s not about disagreeing. You can disagree with her opinion all you want – but why does nearly every argument degrade almost instantly into calling women fat, ugly, bitches, cunts, lesbians, etc. ?

The thing is, this behavior is exactly what she’s talking about – the ingrained perception that women are nothing more than things to be fucked or killed – and how video games help perpetuate those perceptions.

So agree or disagree, but at least can we have some discourse that rises above threats of rape simply because someone holds a different opinion than you?

This entry was posted in blog and tagged bullshit, kickstarter, women in gaming, wtfkery. Bookmark the permalink.

6 Responses to Making the Point for Us: Tropes vs Women In Video Games WTFKery