Tales From The Lake: Vol 5 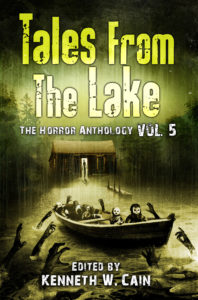 Coming Nov 2!
Buy it on Amazon.

In the spirit of popular Dark Fiction and Horror anthologies such as Gutted: Beautiful Horror Stories and Behold: Oddities, Curiosities and Undefinable Wonders, and the best of Stephen King’s short fiction, comes the Tales from The Lake anthologies.

“Always After Three” by Gemma Files – A young couple discovers that in a downtown condo you almost never know who your neighbours are, or what they might be doing.

“In the Family” by Lucy A. Snyder – A former child actress reveals dark family secrets to her long-lost niece.

“The Flutter of Silent Wings” by Gene O’Neill – A heartbreaking tribute to a Shirley Jackson classic.

“Guardian” by Paul Michael Anderson – Even creatures beyond time and space need friendship.

“Farewell Valencia” by Craig Wallwork – When you’ve got no reason to live, there’s a hotel that can give you every reason to die. So book in, unpack, and prepare to be checked out, forever.

“A Dream Most Ancient and Alone” by Allison Pang – A lake mermaid with a penchant for eating children forms a tenuous friendship with an abused girl trying to escape her past.

“The Monster Told Me To” by Stephanie M. Wytovich – In order for Bria to deal with her past, she must confront the ghosts of her present.

“Dead Bodies Don’t Scream” by Michelle Ann King – If the universe won’t give her a miracle, Allie will make one for herself. But dark magic has a price.

“The Boy” by Cory Cone – Grief-stricken from the loss of her husband, a young woman fears she may lose her son as well, if she hasn’t already.

“Starve a Fever” by Jonah Buck – Fleeing down a bayou highway with a sick criminal in the backseat, a getaway driver must sate his passenger’s horrifying needs while evading the police.

“Umbilicus” by Lucy Taylor – A father becomes involved in a scheme to rescue a friend’s lost son—with terrifying results.

“Nonpareil” by Laura Blackwell – Maisie’s wedding cake business needs every client it can get—but between the groom’s unpleasant family and the mysterious bride’s strange requests, Maisie has a tough job baking a cake that will please everyone.

“The Weeds and the Wildness Yet” by Robert Stahl – Reeling over the death of his wife, Charlie stumbles across a mysterious object—the legendary monkey’s paw. Despite the terrible events that befall that fictional family, he can’t help but give it a try.

“The Color of Loss and Love” by Jason Sizemore – A couple set out to rescue an unfamiliar couple, only to face an airborne disease.

“A Bathtub at the End of the World” by Lane Waldman – A little girl plays with her toys in a locked bathroom. Everything is fine, except for the zombies outside.

“Twelve by Noon” by Joanna Parypinski – A farmer goes about his routine tending to the scarecrows that preside over his field, when three college students show up and cause a strange disturbance.

“Hollow Skulls” by Samuel Marzioli – When Orson’s son is born, the memory of a tragedy creeps back into his life, threatening his very sanity.

Edited by Kenneth W. Cain and represented by Crystal Lake Publishing – Tales from The Darkest Depths