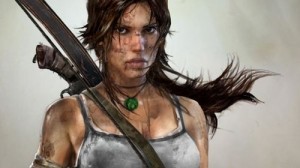 Just a few updates on some of things I  blogged about the other day. (Women in VG tropes and the violent portrayals of women posts…) And I apologize to my readers if you couldn’t care less about these things, but they are fairly important topics to me, so I’m going to continue talking about them.

So first up is the Lara Croft thing – another interview with the creators came out on Kotaku the other day – some of it was rehashed from the Penny Arcade interview where they noted how they were turning Lara into a cornered animal, breaking her down etc.

But in this latest interview, something really irritated me:

“When people play Lara, they don’t really project themselves into the character,” Rosenberg told me at E3 last week when I asked if it was difficult to develop for a female protagonist.

So is she still the hero? I asked Rosenberg if we should expect to look at Lara a little bit differently than we have in the past.

“She’s definitely the hero but— you’re kind of like her helper,” he said. “When you see her have to face these challenges, you start to root for her in a way that you might not root for a male character.”

And maybe that’s the main issue right there – the idea that the players don’t identify with Lara. Or maybe they’re not supposed to. Which, okay – male players who play a game like this, maybe they *don’t* identify. (And maybe it’s because in previous Tomb Raider games, Lara had the personality of wet paper sack. With huge tits. Kind of hard to identify with that.) Most men don’t worry about getting raped on a regular basis, either…so even if it makes them vaguely uncomfortable, they can turn off the game and go back to being a guy and la de dah.

For women, I imagine it’s a different story. For me personally, yes, I *do* self-insert into the video games I play. (Maybe not WoW. I usually just run around and kill things there. And try to avoid getting tea-bagged when I die. You stay classy, gamers.)It usually makes them that much better…but in this case? I’m going to have that much of a harder time with Lara – imagine what it might be like for an actual rape survivor?

But more importantly, where is this “You’ll want to protect her” BS coming from? Am I supposed to feel protective of Nathan Drake? Ezio? Indiana Jones?Max Payne? Adam Jensen?

I doubt it. I suspect that’s how they make it more palatable for male gamers. (No, no, it’s not about self-insertion! We’d never want to make you feel less manly by putting *you* in a rape situation! Your job is to BE manly and HELP Lara through these terrible moments that she faces. You know. Like a man. Except for those men in GTA3. The ones who kill the prostitutes after they have sex with them. But then, that’s manly too, isn’t it? )

Now maybe the gameplay will prove me wrong. I really hope so.  But I think what skeeves me the most is this whole concept of how difficult it is to write female characters. STOP WRITING FEMALE CHARACTERS. Write characters who are FEMALE. That’s the difference right there.

When you try to pigeon-hole a character into having certain traits simply because they are X (female, gay, black, whatever) you often end up with terrible cliches and stereotypical tropes. It’s true for writing stories and it’s true for games.  (Examples of games that do it right? Go check out The Longest Journey or Syberia – sure they aren’t the same sort of game, but both have women protags and they are done very well. They’re a little older, but gameplay is still fabulous if you like puzzle type games.)

Okay, on to Topic 2, which is a mini-update to the Kickstarter thing – which is really more to report that the harassment against the creator has grown to include vandalism of her Wikipedia page, among death threats, rape threats, etc. Additional articles on this here, here and here…and again sometimes the comments are the most telling thing of all. Why this sudden rash of hatred against someone for something they haven’t even DONE yet?

Why is it so offensive that someone might want to look at this topic?  At least wait until something has been produced and then formulate a rebuttal based on that. Moving straight into calling someone an “oven dodger” or a fat cunt right off the bat does NOTHING to improve your position.

Impotent rage everywhere, and it echoes a lot of what happened earlier this year with Jennifer Hepler, a writer over at Bioware. (I mention this only because I was partially involved in the Twitter asshattery that went down, but ended up having to block a bunch of people after getting attacked myself. I don’t mind arguments, but I’m not going to just sit and take abuse simply because you’re brimming with hate. When it devolves into comment Tourette’s, I’m done trying to engage.)

This entry was posted in blog and tagged kickstarter, ranty mcrantypants, women as objects, women in gaming, wtf. Bookmark the permalink.