When To End a Series 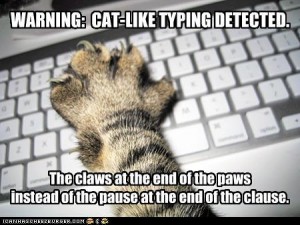 I was asked over Twitter this past weekend if A Trace of Moonlight is going to be the last Abby book. The short answer is: I don’t know.  The long answer is that Abby’s story arc ends with this third book. Does that mean it’s the end of her story completely? I hope not, but there are always a number of factors at play. There’s publisher requirements and those sorts of mundane topics…but it’s also about if there’s *room* for another story. Does it make sense to continue? Maybe. Maybe not.

I had a conversation with a voice actor via Facebook a while back – and I had mentioned that I had no real idea what life was like for actors, but that I imagined it’s a lot like musicians or any sort of artist really – and that you’re only as good as your next gig, or book, or what have you.

Now some people manage to surpass that until they ARE the product, but that’s fairly rare. (And we may think actors have it all, but as much fun as comic-con was a few weeks ago, there were parts of it that were a bit sad too. Some of those celebrities hadn’t put out anything new in quite some time.)

So maybe that’s why we get book series that stretch on way past their due date. Putting on my reader hat for a moment, I started a book last night by a New York Times best selling author…and pretty much wanted to both cry and throw the book across the room. It’s a series that probably should have been retired 15 books ago. The writing is beyond shoddy and the plot is non-existent. Earlier books may not have been perfect, but they were fun…and coherent. This is neither, and the sad thing is that I can pretty much pinpoint the book where everything fell apart. Book X – everything made sense…Book Y? Author just stopped giving a shit.

As a reader it bothers me because it feels like the author doesn’t respect me and is essentially milking a cash cow. As an author, I have to wonder if I would do the same thing. When a series or book is doing very well and a publisher waves a chunk of money under your nose, I imagine it’s probably a very difficult decision to say “No, I’m sorry. You’ll just have to keep all that cash…after all, I’ve got my artistic integrity to think of.”

The reality of course, is probably “Hells, yes, I’ll take it. I’ve got kids to put through college, yo.” And who can blame someone for that? Many authors don’t make a whole lot of money, but sometimes it’s not about the money as much as it’s about keeping your name and your words in front of the readers.

After all, once you’ve got a bit of a fan-base established, you don’t want to leave it in limbo too long. There’s already so much competition for attention out there, and the only way to make sure you’re not forgotten is to keep on producing.

(Unless you’re GRRM or something – in which case you can take several years between books, but that’s a completely different level of success.)

It can be hard to disappoint fans and readers too – even aside from the requirements of a publisher. When readers are asking for more, the usual first instinct is to give it to them. We want to make our customers happy.

Though sometimes that’s a fine line between what a reader wants vs what they need. It’s the same reason I’ll probably never do a Phineas book, though I get a ton of requests for it.  Believe me you do NOT want 300 pages of a panty sniffing unicorn. Ever. (Unless you wave a million bucks in my face, in which case, sure. Kids. College. Let’s go.)

Anyway, I don’t know what the exact moment of truth is when a writer decides it’s time to end something, but I respect those who do. Even when I want more so very badly. There’s a big difference between ending a series gracefully, retiring the characters into a blissful sunset moment with a well-written plot and a solid series…and letting a story linger to the point where it’s coughing up a bloody lung in the corner and begging to be put down like a dog.

And speaking of keeping my fingers in many writerly pies – page 13 of Fox & Willow is up today. 😉

This entry was posted in blog and tagged rambly, series, writing. Bookmark the permalink.

4 Responses to When To End a Series