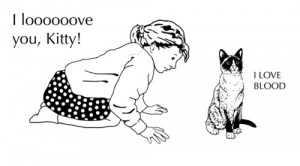 I can tell this is going to be one of those odd weeks. Things keep disappearing. Stuff keeps breaking. Money is being spent like water.

And there’s not really anything I can do about it. My sunglasses will show up with they like, I suppose, though I’m a tad irritated at the DH’s wedding band. Hopefully we’ll find that tonight. And before the jokes start up, yes, he takes it off during the day job rather frequently – mostly because he doesn’t want the criminal sorts to know he’s married. It’s sort of like sitting down in a restaurant and realizing that you arrested the busboy last week and hoping there won’t be any revenge spitting going on.

Have I mentioned being married to a cop isn’t quite like the romance books make it out to be? (One day, I will write an actual cop romance and no one will buy it because no one wants to read about a couple discussing dismemberment over the dinner table. Well, maybe those Hannibal fans, but that’s another story all together.)

The kids are back home from summer camp and we’re trying to get back into the normal routine – but school is starting up in a few weeks and there seems to be this mad rush to try to fit everything in that we’ve missed doing this summer. And eesh. School supplies. Don’t even get me started on that. Why the hell a kid needs 10 glue sticks and 5 boxes of pencils is beyond me, but there we go.

And work…is beyond crazy. I used to be able to write blog posts during my lunch break or if I had 15 minutes to spare here or there, but part of the reason I’ve been so quiet here lately is because I just don’t have any more time. At all.  And while I’m beyond grateful to still have employment at the moment, I’m run ragged all day with projects – by the time I get home I don’t have anything left to give – what little energy is there has to be put toward working on the book.  (The edits of which are still ongoing. My lack of productivity this year has been rather depressing and I’m not sure how to shake that, but I will continue to plug away at it. And I have many ideas for new projects. One of my biggest sources of frustration is not finding the time to get them started.)

But I am still here.

This entry was posted in blog and tagged I'll try to be more interesting next time, rambling, random, updates. Bookmark the permalink.

2 Responses to Odds and Ends