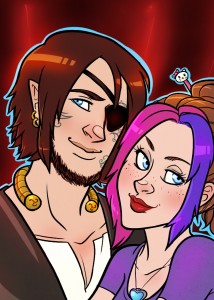 More Friday shinies…but only part of it.

See, I commissioned Jakface for a series of 4 pictures. As though Abby and Talivar were in one of those mall photobooths.

But Ion’s a troll.

But I’m not showing it all off here.  They’re getting printed up as we speak and handed out at AAD.  I’ll probably make them into an animated gif at some point too. Or something.)

I did bling this one, though. Because I could…

This entry was posted in blog and tagged art, fanart, I am a mega dork, shinies. Bookmark the permalink.

One Response to Shiny Bling