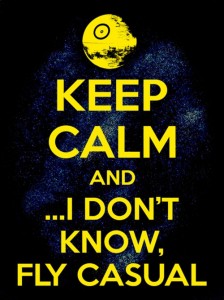 There’s a certain sort of elation when it comes to finishing up a draft – usually followed by a few hours of bliss and then a period of “Now what?”

Or in my case, I get to fight off a nasty cold. Usually it’s a combination of burning the candle at both ends and “let down.” (AKA my body going into relaxation mode after a period of extreme mental exertion. Plus Lucy had a cold/flu thing this past weekend, and I seem to have picked it up. Eh.)

But as I mentioned in my previous post, even though a draft may be “finished,” it never really is.  In this case, I wrapped up the edited draft at about 140k and then cut about 6k off of it, just searching for word echoes and repeating phrases and the like. I’m still not completely happy with the ending, but I know at this point I need to take a step back. I’ve handed it off to some beta readers – now it’s a waiting game to get some feedback.

The fact that it’s Christmas/New Years means I’m not likely to hear back from most for a little while and that’s okay – I’ll be poking at a few little projects of my own, and hopefully return to the manuscript with some fresh eyes in a bit. There’s always an odd mix of excitement and dread when I send out things to be read,  but it’s a necessary part of the editing process, so there you go.

In the meantime, I’m taking a few days to catch up on some reading and gaming (without any feelings of procrastinator guilt, huzzah) and then back to work.

This entry was posted in blog and tagged drafting, editing, waiting, writing. Bookmark the permalink.