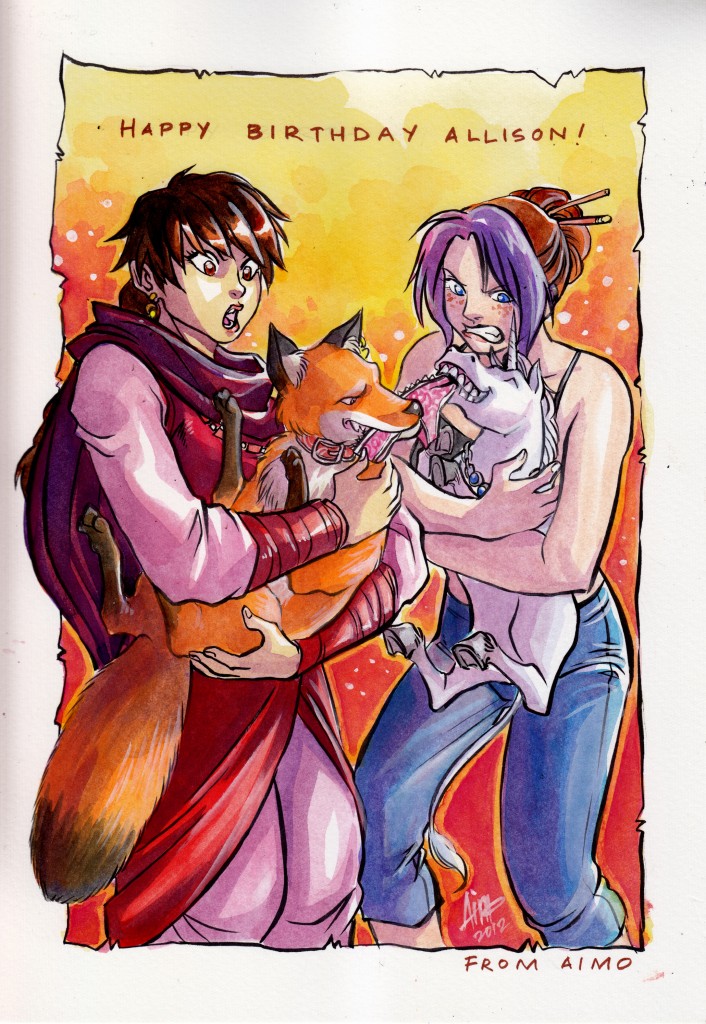 Well, clearly I’ve been a bit lax in my blogging the last few days. I have my excuses – yesterday was my birthday (which is why I’m sharing this beautiful drawing by Aimo – I’m so floored by its level of epic win. I really am.)

My birthday celebration was pretty low-key. My coworker’s daughter baked me a cake and last night just involved pizza and a watching of The Hunger Games. (Hadn’t seen it before and haven’t read the books, though I will now. Though I debate the wisdom of letting the six-year old watch it. Probably going to regret that – she really had a tough time with Rue’s death.)

I realize that it probably sounds like a lame sort of birthday, but I just wanted a night with the family and some mindless fun.  My back pain has increased dramatically the last week or so and I just couldn’t come up with the energy to do anything major. (The DH will be taking me out for a special dinner over the weekend sans sproglets, but mid-week is just really difficult for me to coordinate that sort of thing.)

But here I am today! I have my usual post over at Word-Whores -we’re discussing writing resources we can’t live without. I sorta skirt that issue because I honestly don’t use many (as I explain in the post, ha ha). To be honest, because my writing time is so limited, I often feel guilty using that time to do things like research or craft exercises. I’ve found it’s better for me not to fight it. Unless it’s a major plot point where I *have* to know how something works, I do any real research after a draft is finished and I’m editing. It’s odd to feel that way, I guess – but clearly it’s just one of my hang-ups. And, as I point out in the post, I have a tendency to use utilizing book buying as a procrastination technique. No sense in making it easier to come up with a reason not to write.

Anyway,  Fox & Willow was updated today – we’re starting to get into a major plot point now, so the next few weeks should be fun.

This entry was posted in blog and tagged birthday, fox and willow, word-whores. Bookmark the permalink.