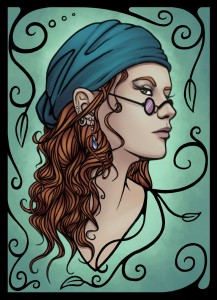 So I’m gearing up to do an additional swag run for A Trace of Moonlight. Now that I’ve got the cover ready to go, that makes things like bookmarks and stickers easy enough, but I also want to do another round of character trading cards.

It will be another round of four, like the other sets, but I have to admit I’m a little torn as to who to get Darchala to draw this time. I’m sort of leaning toward Kitsune, simply because I love fox spirits, and I think Dar would do magnificent justice to her, but there are so many other characters that would also be good.

So, dear readers and trading card collectors, who would YOU like to see?

Tartbarbie? (For a character killed off in the first book, I do seem to get a lot of requests for him. I actually feel lousy for killing him off now. LOL)

I don’t actually introduce anyone new in A Trace of Moonlight (yay? probably a good argument against writing up too many characters, I guess) – so anyone I haven’t done is fair game at this point.

All thoughts and suggestions welcome!

This entry was posted in blog and tagged audience participation, trace of moonlight, trading cards. Bookmark the permalink.