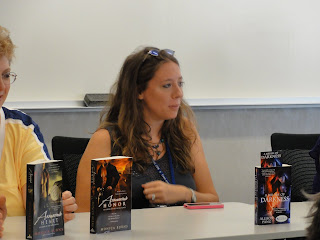 Yay for first panel pics!  (Actually this was my second panel of the day, but it’s the only one I have pictures from, so it will have to do.)

This panel was on Odd Paranormals – and was actually a lot of fun. Lots of Phineas discussion, since he’s probably the oddest thing to come out of the Brush of Darkness universe. (Amusingly, PBS was there and filming a number of the panels. Including this one. It’s entirely possible I’ll be on TV in the next few months discussion unicorn peen. Or not. I had to sign a waiver, but I don’t actually know what/how much they’re going to use.)

Overall, though, the panels were a blast and  I’m very grateful that I had the opportunity to be on them. 🙂 (Incidentally, Monica Burns is awesome, and pimped my book out like mad. Huzzah!)

Since I missed all the fun on Thursday, I’ll pick up with a mini recap starting with Friday morning:

Friday: Pulled into the parking garage at 9 AM. Noted ominous thumping coming from front of car. Checked in to hotel and con and made it to my first panel on time. I was nervous, but AAD was such a nice crowd of people that I never felt like I was being measured against anything. Very easy to relax and just natter on as I needed, though I was probably quieter than some of the more seasoned authors. (I will do better next time around, I suspect. I tend to be quiet and observe my first few times at something.)

Then it was lunch at the Hard Rock cafe with some Meljean Brooks, KT Babs, and Jackie Hussein – good food and peen discussions were had. (Yes, this was apparently a bit of a theme. Not sure why.)

Another panel afterward – the above mentioned Odd Paranormals, and then I pretty much passed out in my room until it was time for dinner. I didn’t end up getting into costume for this one, but afterward a large group of us (including Jess Haines and family) headed over to Max Brenner for chocolate goodness (where I got to meet Carolyn Crane, who rocks.) Then it was back to the hotel to hang around at the Hospitality Suite – I gave away about 25 copies of BoD and just got to chill with fans for about an hour or so. 😀 (It was about midnight at this point so I ended up crashing early).

Saturday: I had mr myn take the car to the local dealership to check out the ominous clunking sound. We’ve had a bad history with the brakes/calipers so I get really paranoid.  A big shoutout goes to Chapman Nissan, who not only fit us in on short notice, but didn’t charge us ANYTHING. Good news is that it wasn’t the brakes. The bad news is there’s a bunch of other crap that’s apparently broken and will cost about $2000 to fix. Survey says? Time to buy a new car.

Anyway – got through all that drama and had my last panel of the con – finally got to introduce myself to Larissa Ione and Dakota Cassidy (also awesome, for so many reasons.)  And yes, there was peen talk there too. 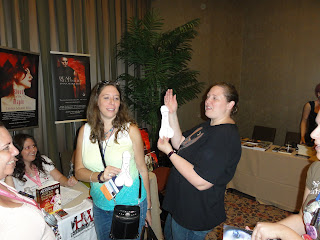 (This was at the book signing. I have a vampire peen made out of paper. No, I don’t get me either.) 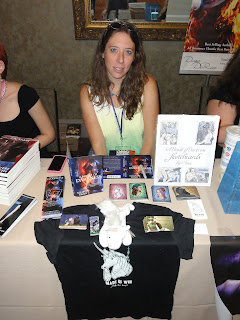 <– Also at the book signing with all my pimping materials.

However, before the booksigning, a bunch of us ran out to the Applebees for lunch, but we ended up leaving when a mega-cockroach came out of the wall. The waitress killed it with her shoe, but we we just chucked $20 on the table to pay for drinks and bailed. No thanks. 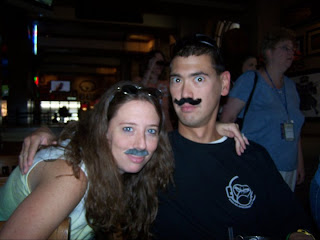 (Before we left, mr myn and I were made members of the Mustache Mafia) –>

Yeah. We’re odd. Though I must say mr myn *does* look pretty dashing.

After the book signing it was time for the Steampunk dinner/ball. This time I did get dressed up (though I ended up changing a short while after dinner. Corsets are fun, but I also like to breathe.) 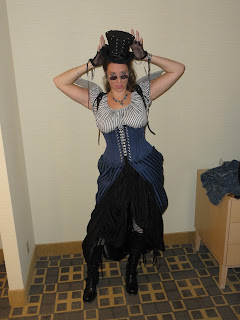 And then mr myn and I walked around Philly into the wee hours. (Couldn’t find any flash mobs of hoodlums, but guess there’s always next time.)

All in all, it was a pretty fab con. There were a few small hitches along the way as far as the organization goes, but I’m just chalking them up to growing pains. Totally can’t wait to go again next year in NoLa. 😀

I’ll be there with bells on. (Or quite possibly, wings.)