Word Whore Thursday: The Methods to My Madness 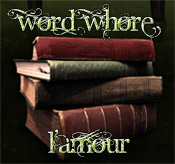 I’m over at Word Whores today talking a little bit about my writing process – the whole pantster vs plotter argument, though I’m not really sure I have much of a method these days. (Aside from “Get the damn book written.” but that probably goes without saying…)

Also, Pocket After Dark is running a contest to win seven signed books (including Brush of Darkness). All you have to do is comment about which cross-over you’d like to see between your favorite characters from whatever series you like. Anyone up for an Abby and Bones pairing? LOL

In other bits of random news, I do have tentative release dates for the sequels to Brush of Darkness – which will be March 2012 and October 2012, respectively. No titles or anything yet, but I’ll obviously post more more when I know it. (And yes, I have to get an FAQ up on my author site. I know. >_< )

This entry was posted in blog and tagged contest, updates, word-whores. Bookmark the permalink.