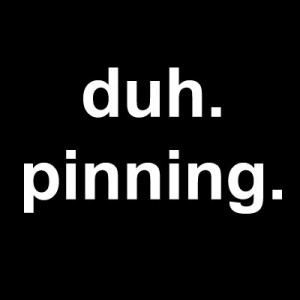 I’ll be honest. I don’t completely get Pinterest. I have an account that I’ve logged into a few times and done nothing with (and yet I have followers. Why?)

I’m feeling a tad curmudgeonly today. Every time I think I’ve got the basics down of whatever social networking platforms are out there, another one comes along. (And oddly enough Pinterest has been around since 2009 – it’s just taking off right NOW.)

And I’m all for getting my message out there however I can do it, but there is a part of me that just wants to shout “Enough already!”

I’ve already got multiple Facebook pages and Twitter accounts, Tumblrs, Linked-In, GetGlue, FourSquare – and I can barely keep up with those half the time. The idea of adding another to the mix?

At the heart of it, I get it – you can pin stuff to your virtual bulletin board. Sort of like if Tumblr were better organized – i.e. the #tags actually worked. And if you had visual representations of those #tags.  But I already spend an unhealthy amount of time on Tumblr as it is (I follow a mostly younger crowd of  gamers and artists, for the most part – it’s one of my guilty pleasures because I can fangirl to my heart’s content and no one cares.)

So is it worth jumping into the pinning pool?

I don’t know. I read an article the other day that says Pinterest is mostly enjoyed by women – I guess the ability to categorize things appeals to our inner organizers or something. And I understand – one of the reasons I hang out on Tumblr as much as I do is because I can easily reblog pictures and inspirational sayings and all the rest of it (as well as type out actual posts, if I’m so inclined.) So maybe Pinterest is Tumblr for grown-ups?

I don’t know, but for some reason it’s just not clicking with me. Maybe it’s the organization thing – I like Tumblr because I don’t have to think much – just hit like or reblog and I’m done.  The idea of trying to organize images of unicorns or roses or fashion stuff or animals or whatever into neat little piles gives me the shivers.

I mean – I can’t even organize my house. Spending time doing it virtually?

But now that I’m done with book revisions, I’ll probably poke around the site again and see if there’s something I’ve missed. I do have invites, if anyone wants one.

In the meantime, enjoy this video about bacon coffins.

This entry was posted in blog and tagged bacon coffin, hmm, pinterest, wtf. Bookmark the permalink.

6 Responses to Pimping for Pinterest (and Bacon Coffin WTFkery)