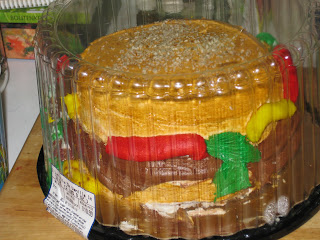 The Northern Star is very bright tonight. You’ll notice I don’t have a picture of it – mostly because my camera truly blows at taking shots in the dark. (And maybe I was too lazy to try.)

At any rate, I have purloined my neighbor’s wireless connection (with their blessing), so I’ll actually be able to keep up with my daily blogs – at least for as long as I feel like.

Yes, that is a picture of a cheeseburger cake. It was full of win. And more to the point, it was my humble offering to Simon and his family when we stopped by yesterday for a lovely BBQ dinner. And there’s not much to say about that except our kids all got along great, his wife is awesome and it was really nice to just hang out for a few hours on our long slog to the beach. (And long being a relative term, but traffic was just an absolute bitch between DC and Baltimore, so the break was nice.) 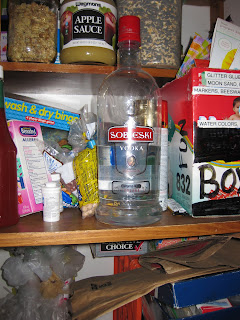 And for the sake of posterity, here is a shot of Simon’s vodka. (I have been told it is merely sitting in the pantry because they had to make room for all the burgers in the freezer. Of course, it’s also sitting next to something labeled “Box of Fun”, so make of that what you will.)

Simon is from Scotland, btw – so he’s got a really nice burr to his voice – Connor was quite happy to point out that he sounds like Shrek, which led to several minutes of much hilarity. (a la Fat Bastard’s “Get in mah belly!” among others.)

And that is all, at the moment. Today was spent mostly at the beach and getting fried, and tonight was spent eating ice cream, so all in all? Fantastic start to the vacation. 🙂

This entry was posted in simon, vacation. Bookmark the permalink.

4 Responses to Cheeseburger in Paradise