So a few months ago, the DH and I decided we’d try to tackle the master bathroom and spruce it up – paint it, tile the floor, replace the vanity. And with a few small hiccups, we actually managed it.  We left the shower and the tub alone for monetary reasons more than anything else.  They were functional and the changes we made still improved the look of things overall, so I was happy enough. (And we painted the master bedroom too, so yay. Being grownups. Getting shit done.)

The only thing I wanted to do in the shower was re-caulk it. Some of the mildew wasn’t cleaning up and a re-caulk seemed like the easy fix.

Until the ants started showing up. We’d always had a few ants wandering around – I’d just assumed they were lost, maybe coming up the drain pipe. Well, upon removal of some of the caulk, we had created a small highway. The ants came up one hole, traipsed over one edge and then disappeared down another hole.

On one hand? Kinda cool to watch.

On the other? Eww.  So we called an exterminator and they put some stuff out and a few days later, no more ants. So back to deciding to re-caulk and also grout a few tiles that were a little loose.

Except that when we looked at the loose tiles, they weren’t just loose. They were 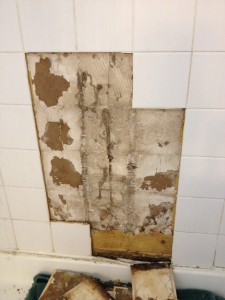 rotting off the wall. DH popped a few off this morning….and hey, look at that.  Water damage. Mold. The fact that the idiots who built our house simply put tile on the dry wall instead of cement backer board. Or at least something that doesn’t crumble when it gets wet. 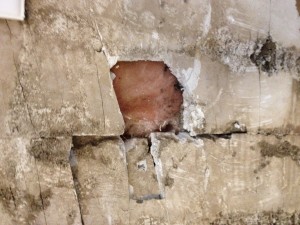 Can you imagine my joy right now? Imagine *real* hard.

Said joy is taking form in the shape of a giant rageboner.

Anyway, so the biggest issue – aside from the fact that we’re clearly going to have to gut the entire shower and rebuild it – is trying to determine if the water damage was caused by the shower itself (e.g. loose shower tiles trapping moisture) or if there is a leak coming from the outside of the house.

Which could very well be, as the same assclowns who built the shower also effed up the sheetrock on that side of the house – instead of laying it like fishscales like you’re supposed to do…they just threw it up however they damn well wanted to and we’ve had several leaks over the years through the window-frames as a result. (And yes, contractors have come out and fixed them as we discover them.)

Contractor is coming out on Monday, in fact. I’m really hoping that it’s just a shower thing and we can fix it quick. If not, worse case scenario is that they’ll have to rip apart that side of the house and rebuild it.

Guess I better crank out that best seller soon. >_<

This entry was posted in blog and tagged assclowns, house issues, ranty mcrantypants. Bookmark the permalink.