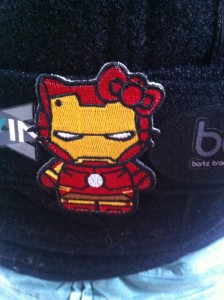 I’m wearing my back brace today. (Nicely  decorated with an Iron Man Hello Kitty because of reasons.)

There’s been an element of WTF to this week back-wise. I ended up going to the chiro three times. Monday something was massively out of alignment and causing me severe pain. Wednesday was a regular…and then today. Had an MRI yesterday and after that everything on my right side was gorked up enough that if I laid down flat on my stomach, my right hip bone didn’t touch the floor. So I’m bracing and icing after my realignment, but it’s complicated by the fact that I can’t take any anti-inflammatories for the next 10 days. (Yay, upcoming pelvic prolapse surgery.)

Had a quick look at the MRI images and let’s just say that L4-L5 disc is toast. (Chiro was quick to point out that it’s good that it’s herniated the way it has – if it were shifted just a bit I’d probably be in way worse shape. Small favors.)  Third back surgeon also said a double fusion was the way to go, but now I have to wait 12 weeks after the prolapse surgery, so that’s going to push things back to the late August/early September timeframe. 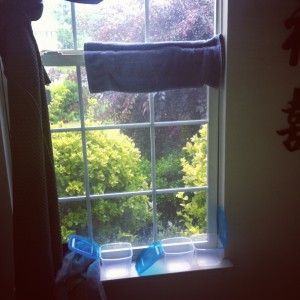 And don’t get me started on the windows. As I’ve noted previously, the builders of this house were clearly on drugs or complete idiots.

We’ve been finding leaks in a large number of windows over the years – this one has apparently been leaking for quite some time based on the amount of damage that was hidden beneath the blinds.

Not sure if we’re just going to get the window frames replaced (there’s at least 5 or 6 that need replacing now) or bite the bullet and look at replacing ALL the windows with something a bit more efficient. Either way, not sure how we’ll do it. The unplanned AC replacement this year kinda screwed up our plans for the summer.  (The jackass who owned the house before us built the deck himself and it’s not to code and he only waterproofed half of it. So, yeah. Hello, money pit.)

That being said, here’s hoping I can get some major amounts of editing done this weekend. I’ve got at least one entire chapter I need to add, so time to buckle down. 🙂

This entry was posted in blog and tagged rageboners, stupid back, stupid house, stupid rain, stupid windows. Bookmark the permalink.

One Response to Back Bracing