A Room At A Time 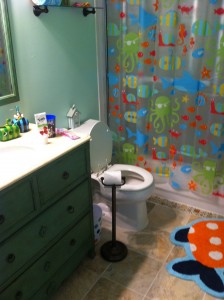 I’m not sure why home improvement projects always end up becoming larger than than their projected scope.  Though it’s always a bit of a risk whenever you start pulling up the floor or knocking out a wall.

Probably true about a lot of things really – surfaces hide a lot of issues and flaws, sometimes.

While we are waiting for our shower to be rebuilt (next week, yay!) we went ahead and decided to redo the kids bathroom. And by we, I really mean the DH, who has managed to turn into quite the handy man.  (He’s even talking about building the kids loft beds now, but first things first.)

We’re lucky though – his friend has a wet saw and a blow torch, which has made some things a bit easier.  But of course, nothing happens without a few bumps and no matter how much time we think it’s going to take to finish one of these projects, it always, always takes longer.

In this case, it was much simpler than the master bath redo, but of course, once we pulled up the old floor we discovered that there was a leak coming from the tub that had molded up a chunk of the subfloor and part of one of the walls. Joy. So mold killer and sanding and cutting out part of the drywall, etc. etc – set us back a few days right off the bat.

Tiling was easy. Painting was easy. Lights were easy. The vanity? Eh. These things never quite fit the pipes right, but we had an afternoon of tremendous frustration when the faucet we bought apparently had something wrong with it. (We thought it was the some of the clamps – several trips back and forth to the Lowes and Home Depot proved us wrong. Not the clamps, but part of the faucet itself was wrong.)

But it’s done and working now – we just have to put some new baseboard in and we’re golden. Which is good because for just over a week we had one bathroom with no shower, and one bathroom with ONLY a shower. Which gets a bit crazy at times.

We’re getting new garage doors put in next week as well (same day as the shower rebuild, of course. Because I love having a billion things to focus on at once. Clearly.) Not that we were planning on replacing them until next year, but the HOA, being the assholes they are, said they needed to be replaced. (or “fixed.” Technically they work, but we don’t use them much, since the douchedicks who installed them when the house was built didn’t actually attach the garage door openers to studs and they’ve fallen out of the ceiling a few times. But we were still hoping to hold off until next Spring so we could save up some extra cash – the shower rebuild is a massively high and unexpected cost.)

So, new doors it is. Only because we’re replacing the wooden doors with metal doors, we had to get the HOA’s permission. And then we had to ask all our neighbors to sign off on it. Hoops, hoops, hoops. Let’s jump, y’all.

One Response to A Room At A Time