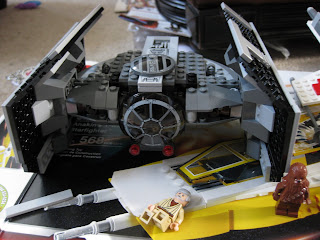 Connor turned 7 yesterday. Not that that’s an excuse for not blogging. (I reserve the right to NOT blog when my Outline is due in two days. Which doesn’t really explain why I’m doing it now, except I really like blogging.)

Okay, back to the point, which was Connor’s birthday. We had his actual party on Saturday, but the end result of said party was lots of Lego Star Wars stuff. And not just the little kits, either.

Which meant that most of my day on Sunday was putting them together. (And playing Lego Star Wars/Lego Harry Potter on the XBox. Did I say Outline? Bah. I’ve got Storm Trooper arms to pull off.) 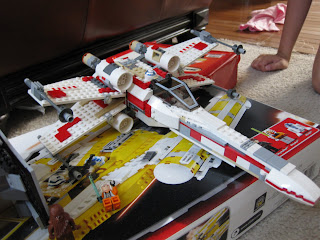 To be honest, for all my grousing about it, I actually really enjoy putting them together. My brother always had a ton of legos when we were growing up and I used to play with them all the time. (Eventually they started making legos for girls – pink and purple and white. I seem to recall you could be a horse stable or something. I also seem to recall thinking that was totally lame. Please pass the pirates, the giant castle and the space men? Thank yew.)

At any rate, we still have a few of the smaller kits to build, but the X-Wing, the Tie-Fighter and whatever that big yellow thing is are now done. (It’s from Star Wars: The Clone Wars. Anakin drives it with his little Snips padawan or something.) 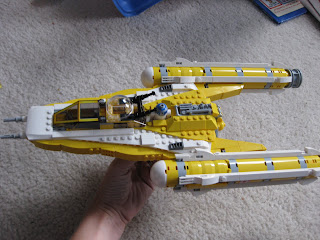 It’s really big too – I left my hand in the shot so you can get an idea of the scale.

Anyway, I really like them – I just wish they weren’t so delicate. I mean, they look really nice, but some of these things are so intricate and if you breathe on them wrong they just sort of fall apart. Which is irritating after you just spent over two hours putting it together. (Including having to snap at the 3 year old for constantly walking over the pieces, only to discover that *one* little thing that holds the entire ship together is now somewhere in the bathroom.)

And of course, after we’re done, all Connor wants to do is crash them together in some huge epic lego-orgy battle.

But that’s really what Legos are meant for right? Setting them free to…um…connect with other pieces, wherever they should come across each other?

This entry was posted in Connor, lego, no sleep 'til brooklyn, random. Bookmark the permalink.