The Art of Self-Acceptance 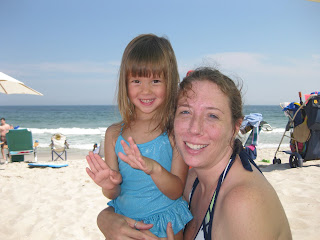 So I’m finally getting back to the grind today, which is good…but also sort of sad on a number of levels. I spent a lot more time at the beach this past week than I normally do on vacation, simply because it was so hot and the ocean was the only thing that made it bearable at times. (Not that you’d know – I don’t tan, apparently, Irish me.)

I had a lot of time to think (as well as people watch.) And as I watched Lucy play in the sand I had to marvel at the careless way she moves. There’s no sucking in of her stomach to make herself look thinner, no wondering if that once piece makes her butt look big. It’s just her and the sand and the waves and the hells take the rest of it.

Which is how it should be, obviously. I mean, she’s only three and a half. But then I have to wonder at when that all changes, and how much influence I have over that particular brand of innocence.  I know my mother was always slightly obsessed with her weight, and it obviously bled onto me. I was a skinny little thing myself, and then one day when I was playing with my friend, my mother said something like “Oh my goodness. You were always so much skinnier than Christie. What happened!”

And yeah. There we go.

The truth of it is was that nothing happened, except I’d grown hips and a chest. Which of course makes you look wider. Because, duh. My friend, incidentally, never did. She was Norwegian and just grew up and up until she was about 6’2 and basically turned into a super-model. Everywhere we went, guys just randomly came up to her and asked her out. (Which, yes, I can admit now was a bit awful on my own ego – I wasn’t particularly good looking in the teenage years, but it can really suck being constantly ignored by guys fawning at your best friend’s feet.)

At any rate, I still have this terrible habit of comparing myself to others, though I’ve really tried to squash it over the last several years. And not just physically, although there’s a certain element of that – but it can be just a constant run-through of wondering if I’ll ever be “good enough” or if I “measure up” to everyone else. (And yes, I know it’s horribly ego-centric to think anyone is looking at me at all. They’re not. I know this. Call it years of living with massive insecurity.)

It’s not a particularly pleasant thing to have to admit and it’s not something I’m overly proud of.

It tends to suck the joy out of life, actually, especially given that much of the shit I fret over cannot be changed. My hip bones are where they will always be. (Although maybe a tad wider now since having kids…but that’s how it goes).

At any rate, my connection over last week wasn’t good or I would have written more about this when it had actual relevance, but I was struck by part of this blog post by BeeGirlBlue, which then led to this post by Natalie.

I admire their courage. And I envy their sense of self-worth. 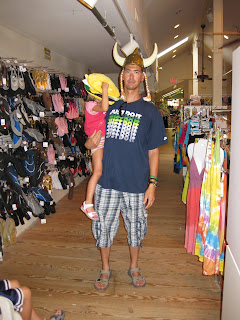 On the other hand, mr myn clearly doesn’t give a crap what people think of him…which is one of the reasons I adore him.

Yes. Lucy is wearing a cheeseburger on her head. She doesn’t care either.

Perhaps I should take a lesson from that.