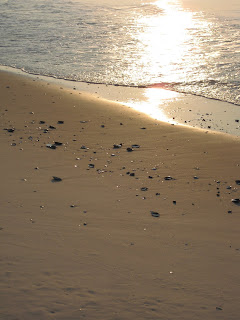 The best time to beach-comb is at dawn.

I think nearly everyone probably knows this. Something about the way everything seems so perfectly untouched, with new treasures washing up in each small swell.

Or maybe it’s just the potential that is so interesting. The knowledge that you can’t actually collect each seashell as it appears. If you let one slip away, is it lost forever? Or if you wait around a bit will a better one show up? And how long do you wait before continuing on?

When I was little, I used to look for beach glass, though that is fairly rare it seems, these days. I also used to find moonshells, though that is nearly almost as rare. I haven’t found one in ages, honestly, and that’s a bit of a shame.

Today we mostly looked for oyster shells, but we found the usual sorts of scallops and angel-wings, clams, arks and cockles, jingles and mussels. A nice assortment of dead crabs (spider, it seemed), picked clean by the gulls. 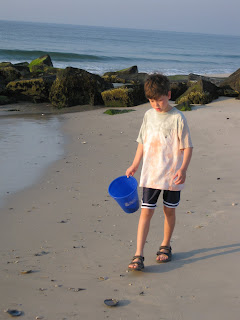 And of course, that’s not to say we haven’t been collecting them every day we’ve gone to the beach so far, but there’s still something really cool about being the first person there (or close enough anyway – I’m not sure the joggers really count.)

At any rate, it’s been very hot here this past week – the breeze by the house was very still last night so I didn’t get much sleep, but I had promised Connor we’d do the sunrise walk, so I got up at dawn and woke him up and off we went.

Though we did have the added bonus of fresh baked cinnamon buns to look forward to, as we stopped by the House of the Rising Bun afterwards. 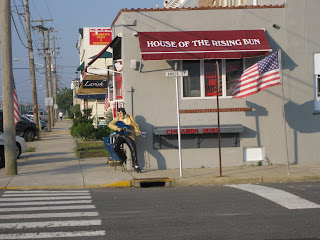 We got there just as they opened, so I bought the first batch. (Although, I had to run up a few blocks further to get cash – many of these places are cash only, but try to find an ATM that’s open at 6:30 AM and see how far you get.)

I had been thinking though, that writing is very much like beach-combing. (And I’m only thinking this since I hardly slept and I’m in the middle of trying to write my outline, so it’s on my mind.)

But when I’m brain-storming, it’s a lot like looking for shells. Tons of ideas everywhere, and it’s hard to tell which one are the good ones – do you write them down, look them over and toss them back into the sea? Wait for something better? Or by NOT writing them down, do you run the risk of forgetting them? By waiting for that “perfect” shell, do you overlook ideas that might actually be perfect with a little reworking or that might be all the better for their flaws?

Either way, I’m hoping for cinnamon buns at the end. The icing make all the difference.

This entry was posted in blog, writing and tagged beach, writing. Bookmark the permalink.