We Can Rebuild Her… 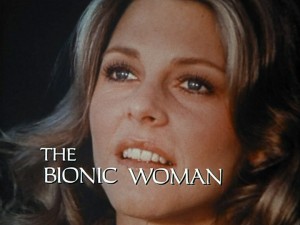 To be honest, I never really watched the show.  I vaguely remember seeing it on TV once in a while (along with The Six Million Dollar Man), but aside from the killer sound effect, coupled with the slow-mo, I don’t remember that much about it.

Funny how moving everything slower somehow made it look more impressive on TV. When I hobble into the bathroom every morning because I can’t stand straight it doesn’t seem nearly as cool.

Anyway, I ended up spending several hours waiting around the doctor’s office yesterday – everything was backed up since the snow the day before played havoc on people’s appointments. But  eventually I got back there and chatted with the neurologist.

It sounds simple, but I’ve got one of those back issues that isn’t. And more importantly, there isn’t just one way to treat it. So I’ve got all these opinions from various health people and they’ve all got ideas and suggestions, but they always leave it with “but it’s up to you.”

If I knew what to do, I would have done by now.

Every procedure has its advantages and disadvantages. A short term gain now could be a nightmare later on if things don’t heal right. Or a procedure might not make anything better. Or might make it worse.

None of the docs can make me 100%. They’ve all agreed on that. But I’m getting a wide variety of percentages as to what they *can* do. And of course, they all recommend *their* specialty.

At the moment I’ve got about three main choices.

1) Status quo. Do nothing. Just manage the pain and hope things don’t get worse.

2) IDET – fun procedure that involves sticking a wire into the torn disc and heating it up to 195F for 15 minutes, thereby melting the disc shut and burning out most of the nerve ending. Recovery is 4 to 6 weeks. Any pain relief that occurs may take up to 3 months to show up. If it helps. Insurance doesn’t cover it and it runs about $3500.  However, it is less invasive than a fusion and has the advantage that if it doesn’t work, I can always do the fusion after that. However, there haven’t been many studies on it so no one can tell me if it will really help or not.

3) Fusion – Yeah. Well. Doc yesterday mentioned doing the XLif procedure. They go in through the side, remove the disc (and the one below it, if I’d like to do both vertebrae at the same time. The lower one is the one I had my microdisectomy on a few years ago. This doc thinks it may be contributing to issues as well. But…it’s up to me. Of course.)  So they remove the discs, stick in a wire cage spacer, throw on some stem cells and cadaver bone chips to promote bone growth. And then go in through the back and screw and plate that shit together so I don’t move too much. Yay, hypermobility. Advantage is that insurance will pay for it – or most of it. Which is good because I don’t have $100k sitting around in my pocket. It’s well studied. If I heal well, I could be back on my feet in the same 4 to 6 weeks. Long term issues include needing to go back in later and do the discs above – because once you start down this path, there is no going back. The discs above the fusion end up taking the brunt of the mobility issues and possibly creating a domino effect of long-term suck. Also? Weakness in thigh of whatever side they do the initial cut on. Guess when you start hewing through back muscle, it causes problems elsewhere. It’s supposed to heal. SUPPOSED TO. The lady in the waiting room complaining about how weak hers was a month later didn’t actually instill me with confidence, yo. (“If only this burning would stop.”)

Might end up with a cane for a bit. Huzzah.

Second and third opinions? Yeah, I’m gonna try to get some of those, but I can’t help this overwhelming feeling that no matter what I do here it will be wrong.

Anyway – Word-Whores post yesterday was on increasing productivity. (Though I’m not sure I’m the one to ask at the moment, ha ha.) 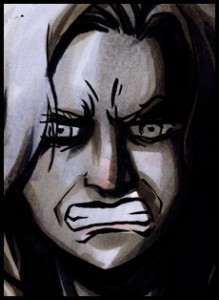 And new Fox & Willow up – watch out for Jessa’s scary fais.

(This needs to be my back pain avatar, I suspect. Grrrrrr.)

This entry was posted in blog and tagged back pain, fox and willow, my stupid back, whiny mcwhinerson, word-whores. Bookmark the permalink.

One Response to We Can Rebuild Her…