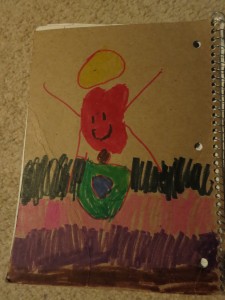 So if you follow me on Facebook or Tumblr at all, you probably saw me post this lovely drawing by Lucy yesterday. Yes, it’s a heart taking a poo. I don’t particularly understand her logic behind why it needs to take a dump in an outdoor toilet, but 6 year old minds are a wonderful puzzlement.

Maybe it’s a statement about love.

On the other hand the rest of her journal is full of stories and pictures that make me think she’s going to be a romance writer.

Yes, there are pictures of ninjas – several of them, in fact, but she was very excited to share one of the stories last night involving a little boy who was bullied. (Complete with pictures of children lining up and kicking the boy. The children all have huge shoes. Perhaps they are Dutch?)

Eventually the little boy meets a girl who is also bullied and they become friends. At 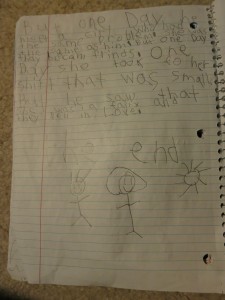 some point the little girl takes off her shirt (!) and reveals that she’s a fairy – at which point they fall in love. The end.

(Not much of a picture for this page, but I thought it was cute anyway).

I’m always fascinated what drives the plots of children’s imaginations. I mean, yes, I remember playing out these massively intricate storylines of my own with a pretty large menagerie of stuffed animals. (I had a raccoon who used to ride a Snoopy dog like a horse. He had many fine adventures, by the way.) 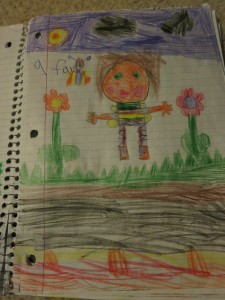 Connor has some pretty crazy storylines himself, but most of them are based off of existing fandoms – Star Wars, Transformers and the like. (Though he did come up with a great idea for a video game at one point. I wish to hell I had the ability to do something with it because it’s a really neat concept.)

But Lucy doesn’t usually base her stories or her play time on specifics. She absolutely gets inspired by them – she watches a show with a tiger character and then next thing you know, she’s playing tigers – but the difference is that she’s not playing *the* tiger character itself, just using it as a jumping point to come up with her own stuff.

Which is an awful lot like what authors or artists do. I know plenty of authors who don’t read books in the genre they write (or at least not when they’re writing themselves) – simply because they don’t want to be directly influenced – even if it’s subconscious. 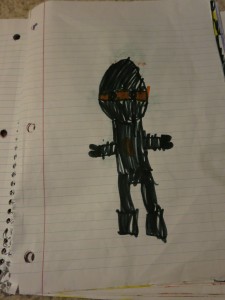 happens when you play with her. Connor might set up a base scenario and then just see what happens. Lucy is like a play director – If I’m the Mommy tiger, I have to do X, just so. And then Y. And then Z.

Makes it a bit tough to play with her sometimes, because it takes some of the fun out if . I wonder if it’s just that she really has an idea that must be executed a certain way or if it’s her way of exerting control. (6 year olds don’t get a whole lot of say in things that happen in their lives sometimes, so maybe she’s just taking it where she can get it.)

Of course, there’s a parallel with being a published author here too (at least traditionally.) For the most part, the only thing I get to control is the writing part – everything else from the cover, marketing, publicity…all of that is done in some mysterious method by the publisher. I’m not usually consulted on much, and even when I am, that doesn’t mean I’m going to be listened to.

Anyway, new Fox & Willow up at some point today (we really ran behind this week due to massive deadlines for Aimo), but we should be back on track next week, so bear with us. 🙂

This entry was posted in blog and tagged connor, fox and willow, inspiration, Lucy, writing. Bookmark the permalink.

One Response to Inspiration