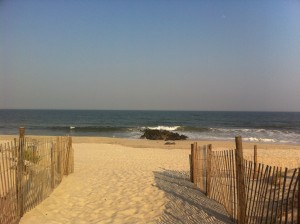 The problem with going away on vacation…is coming back from vacation.

And it’s not even that I have all the business type things to do – the emails, the website updates, the grocery shopping, etc.

It’s having to come back to reality.  There was something really nice about the basic routine this time around, which essentially was nothing more than getting up early, eating whatever, maybe going for a walk on the beach or wherever, doing nothing until about 2 PM and then heading to the beach until 5 or 6, showering, dinner, drinking (at least as far as the rest of the family went) and maybe another beach walk.

Which sounds fairly simplistic, but I was in desperate need of simple.

And that’s not to say my “do nothing time” was actually spent doing nothing. It’s more that it was spent NOT working.

In fact, I could break down the things I was doing this way:

2) Beach – walking, beach-combing, swimming, plopping my ass in a chair

4) Cross-stitching (OMG, I forgot how much I miss doing this. And how fast I am at it when I have large amounts of uninterrupted time with nothing hanging over my head. Finished one mini-project and got a major chunk done on another one that should have been finished years ago.)

7) NOT writing. At all. I barely cracked open the laptop.

8) Listening to audio books. (During beach-time and sewing time.) Incidentally, one of the books I listened to was Teleny. Which was awesome for two reasons – one, it’s a completely pornographic story attributed to Oscar Wilde (and anonymous others). The purple prose is jaw-dropping.   Two, the version I got was read by Nick Boulton, who happens to be the voice of M!Hawke in Dragon Age 2…so fangirl squees ahoy, as his voice is lovely. And he should get a metal for even attempting to read this aloud without breaking into giggles.  (Believe me, I had headphones on for obvious reasons and every time I heard the phrase “weeping penis” I pretty much lost it.)

9) Mini-golf/arcade/amusement park (Less thrilled about the $$ spending here, but the kids really enjoyed it.)

So yeah, that’s the extent of it. Probably fairly boring for most people, but I think what I appreciated most was finding a more natural biological rhythm when it came to eating and sleeping.  We forget sometimes just how forced our lives are, shoving them into neat little boxes of meetings and work and and more work. And not sleeping enough.

For the record, I imagined how much writing I’d get done if I didn’t have to work and I lived by the sea…and it would be an awful lot. And be awesome.

However, neither of these is an option at the moment, so the best I can do is maybe look at reorganizing my daily life a bit more so that things aren’t hanging over me as much as they have been. (Plus, exercise – post vacation weight gain? Oh yes. Hello bacon. Hello fudge. Hello pork roll. And eggs. And pancakes. And sammwiches.)

But that’s done now…so back to the regular grind, though I’m hoping to run out and buy new sneakers tonight. (The old ones are so slick on the bottom I slide off the tread mill).

And of course, back to writing. (Just got the first-pass-pages for A Trace of Moonlight last night as well, so huzzah!)

This entry was posted in blog and tagged beach, random, routine, trace of moonlight, updates, vacation. Bookmark the permalink.

3 Responses to Catching Up