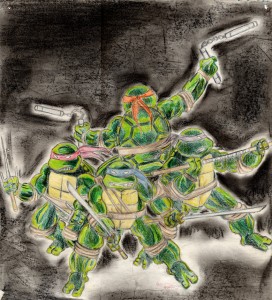 A long time ago I could almost sort-of draw.

And by draw, I mean I could copy pretty well. Not trace…just copy. I used to do Disney characters and the like, but I also spent a lot of time working off of the Froud/Lee Faeries book. (My father is cleaning out the old house, so I’m finding a lot of my old sketchbooks in the piles. It’s sort of odd, really. I haven’t attempted to draw anything for well over 20 years now.)

The turtles there are a terrible mix of pastel, color pencil and marker, but not too shabby for someone who was 14 or 15 when she did it. (particularly the Faerie ones – I can post the originals too, for comparison…)

In the meantime, I was also given a box with my first and only attempted sculpture.

And the only thing I really remember about it is that I used a spaghetti press to make the hair. Everything else was just clay – I didn’t use any wire or wax or anything beneath it – just sorta felt my way around with it. (I also remember my parents were watching The Handmaid’s Tale in the other room and wouldn’t let me come into watch it, though I’m not sure why.)

Anyway – I was going to post some images of it, but even though I’m not overly superstitious, I’ve had enough weirdness going on in my house today that I’m  under the impression I probably shouldn’t. (Internet going down as I attempted to post, part of the sculpture actually breaking as I tried to take a picture, that sort of thing.)

And seeing as I JUST got my internet back on and the HVAC guy is nearly here (because I lost AC as well), I’m just going to let mysterious sleeping dogs lie.

This entry was posted in blog and tagged art, rambly, sketches. Bookmark the permalink.

One Response to Almost Art