Well, it’s not much of an update, really. I’ve seem to have taken to writing my blogs in my head again (whether in the shower or driving to work or folding laundry or whatever.) Not sure if it’s the effort of trying to organize my thoughts that triggers the mental acrobats, but what’s interesting it that once I’ve done it, I no longer seem to need to write it down here. Go figure. (It’s too bad, really -because I’ve “written” some pretty deep and interesting stuff that way. LOL). I would like to put up some specific posts here in a bit, but I’ve got a lot of pictures and I need to figure out how to organize them.

Still, most of the last few weeks was spent prepping for The Gathering over at Nationals (i.e the PRISM awards from FF&P). I was in charge of coming up with the programs and the pins and business cards to hand out, so that was a bit stressful from time to time. Add to that the complication of trying to get Connor’s birthday party off the ground and my back getting ready to go out again and that gives you some idea as to what I’ve been doing. (Plus both kids managed to get sick in the last week and my car’s door locks all stopped working. Whee!)

And then, of course, there’s the line edits. One of my CPs pointed out that I am apparently quite the fucktard when it comes to commas. So she nicely shredded the MS in about 2 days to point out all the places I screwed it up. I am dutifully fixing these places. And then, somehow, I’ll get it sent out. Though really, it should have been sent out way before this – but when it comes right down to it, I suppose I’m a bit of a coward about it all. Easier to say I’m going to send it out than to actually do it. (After all, if I never actually send it, it can’t get rejected, can it? On the other hand, the chances of it magically getting pubbed by never sending it in are pretty much nil, so guess I’m screwed either way. LOL).

Did meet some nice people at the Gathering – besides the usual suspects, that is. Really great to get a face for some of the anonymous masses that I email/facebook/twitter with, and I found another editor I’d like to submit to (or at least query). (see above, hello?)

That’s it for now. I’ll leave this post with a nice random shot of a silly seahorse I made with playdough last week. (And yeah, it started out as a dragon, but my children commandeered the rest of the blue, so I made a seahorse instead. Wah.) 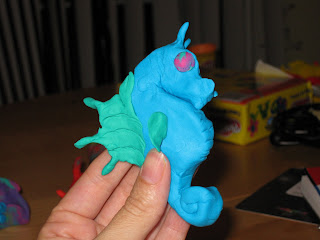 This entry was posted in gathering 2009, random, updates, writing. Bookmark the permalink.