It’s no secret that I’m never going to be particularly happy with certain things about my body. At the moment, it’s ‘Mommy Ass’. I mean, seriously – after dropping 30 pounds last year, you’d think my behind would have whipped itself into some sort of shape, but alas, it remains flat and wide. Although, I suppose I come by it honestly. I recall my mother having much the same thing. One the other hand, wider hips means that both my labors were done in 10 minutes or less. (3 pushes for Lucy!). So, I guess it all evens out. 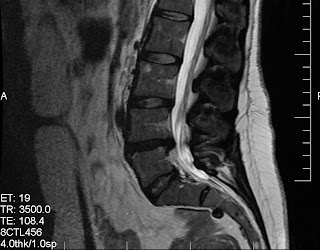 The back itself is another story. This is my MRI from last April (2008), about 3 months after I cracked a disk. You can see it there – L5, I think. It’s the black one protruding without any white stuff inside. Even aside from that, I’ve got at least one fracture in the vertebrae that I’m aware of (or least some place is missing a chunk of bone), the lower right side of the vertebrae (the scottie dogs) aren’t even there and the left side is apparently nicely deformed. And dude – my tailbone bends at a 90 degree angle. WTF is up with that?

I’m also horribly hyperflexible, which means the majority of my joints bend outside the realms of normal and somewhat into the realm of “freak”. (Not Cirque du Soleil realm, mind – but enough that I give the PT people fits when they try to stretch me out.

Them: “Do you feel a stretch yet?”

Them: “Okay – stand on this phone book and try to touch the floor.”

Them: “Okay – stand on this second phone book and try to touch the floor.”

Congenital defects being what they are, there’s a lot of evidence that back issues also can cause a number of the other issues that I have, including the VVS and the IC. All that muscle tissue is connected there, and if the spine isn’t up to the task than I would say it makes for good argument. Which leads to the interesting conundrum of how do you fix it? I’ve been on more drugs than I care to count over the years, most of which didn’t do much other than make me horribly loopy.

I got a second MRI this past week and I’m waiting for the results, but a quick glance at the CD doesn’t show much difference from the last one, although the discs above and below the cracked one look a tad less bulgy, so maybe they’re getting better. Though I wouldn’t know it, given how grotesquely hard the knots are on my left side. I’d gladly take a sledge hammer to the spine right now if I thought it would loosen them up.

Failing that, I’m going to see about getting an inversion table. I’m not one for hanging upside down, but I’ll gladly do it for 10 or 15 minutes every other day if it helps.