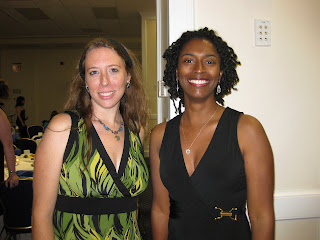 Ok, so I’m only a week late with this…and yay! I finally got to meet La-Tessa! We’ve only been chatting away with each other for over a year now, so it was great finally getting to meet her in person. And hey, we’re practically wearing the same dress…but she wears it way better than I do. LOL.

Anyway. The Gathering was a great success. It was nice seeing some old faces from Romantic Times, and connecting with other online friends from workshops or mailing loops or crit groups. It reminds me that even though writing and getting pubbed is a personal journey for many of us, there’s still so many people taking it together. Comfort in numbers, maybe…even with the threat of competition. Though really, I’d prefer to see it as encouragement via proxy. 😉
I’ll admit I was pretty tired that evening, though. Lucy had kept me up the entire night before, the dress I wanted to wear hadn’t come in (I had to rush to Kohl’s on Wednesday to find a quick replacement), and the pins ended up being signature only. And of course delivery attempt was also on Wednesday, and I wasn’t home. I ended up having to drive an hour of out my way on Thursday afternoon to get to the FedEx in Alexandria (coming from Centreville) to pick them up. Then it was leaving work early, taking the Metro downtown and borrowing Jeffe’s and Michelle Miles’ hotel room for a quick change.
Of course it was like 95 degrees and 100% humidity that day, so by the time I made it to the hotel I was utterly soaked. And Jeffe left me a key at the front desk, but the hotel people had no idea what I was talking about when I asked them for it. I had to pull Jeffe out of her Passionate Ink award ceremony to get her to call the front desk to let me in (but seriously, thank God for IMs and Blackberries!). So, change in the hotel and walk the half block to the *other* hotel to find the Gathering Room, clutching my newly printed Programs and pins.
Everything was set up and we let people in and dinner was served. My table was supposed to be reserved for the FF&P board, but we had some latecomers. Apparently one of them was a “famous” author, but to be honest? I have *no* idea who she was. She brought her dad along though and he sat next to me for a portion of the dinner. Apparently he was a high school biology teacher and he made quite the fuss that his daughter used him for all her scientific research for her books. At which point he started a lengthy discussion on how all her vampires were scientifically based and blood-based viruses and anemia. And I have to say, it was kinda cool to tell him that I actually had a degree in Biology, and that my favorite subject in college was my Eukaryotic Cell and Developmental Biology class. (lovingly titled ‘Cell Hell‘ aka Best. Class. Ever.)
I don’t know if it impressed him or not, but he got quiet for a little bit.
Although the Gathering normally has an editor/agent panel, this year we ended up with an Author panel, including Catherine Asaro (the Nebula award winning author, who also happened to provide the evening’s entertainment), Leanna Renee Hieber and Jade Lee, among others. It was actually rather fascinating to hear them talk. Many authors are introverted by nature, so sometimes it’s hard to get a feel for their sense of the craft. (Not this crew, though…LOL) Overall, I found the panel to be refreshing. Although agent/editor panels can be interesting as well, it sometimes seems to me that there’s an aura of…something…that tends to hang around. I wouldn’t call it fear, exactly. Just one of those things where all the authors there know that these people have the ability to make or break them in the publishing industry. It tends to be a little intimidating.
Hmmm…I’m not sure I have a way to wrap this up, so I’ll just leave it with the fact that it was a great time and I wish I could have stayed longer. (However sleep and the Metro called and like ms Cinderella, I had to go.)
This entry was posted in gathering 2009. Bookmark the permalink.