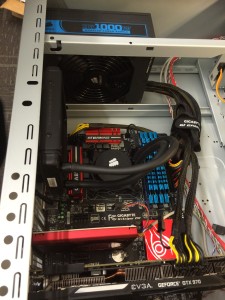 About five years ago I had a really nasty run-in with a computer built by Dell, which led me to 1) Swear I would never buy another piece of crap from them again and 2) Decide to build my own computer from scratch.

And by “build myself” I mean buy the parts and let my more savvy techhead coworkers put it together. It’s a win-win, really. I get to build to my specs, coworkers get the fun of putting together a fairly high end machine and off we go.

Not that I can’t do most of this stuff myself – over the years I upgraded various parts like video cards, sound cards, hard drives and the like. But when it comes to CPUs and whatnot, I get a little more nervous so I’d much rather have someone who does it on a regular basis put it all together.

On the whole, it’s been of the best tech decisions I’ve ever made. It’s lasted longer than any PC I’ve previously owned and with minimum issues. In fact, the only reason I even looked at upgrading was because the parts were getting a bit long in the tooth. It’s one of those waterfall effects, really. The sound card died and I bought a replacement, but then I really decided I wanted to upgrade the ram, but since the mobo was having some issues recognizing the SSD drive I’d put in earlier this year, I figured it was just easier to buy all new parts instead of band-aiding it along.

(There hasn’t been a BIOS update for that particular mobo in well over three years, so I was pretty much SOL anyway, never mind it was having issues with my Razer keyboard – plug in both USB ports and watch it reboot over and over, ewww.)

So, that in mind and with my surgery looming, I decided to upgrade, scavenging the case and hard drives from my current rig with the following components:

6) Creative Sound Blaster Z PCIe 116dB SNR Gaming Sound Card with 600ohm Headphone Amp and Beamforming Microphone  (for some reason there was no microphone in the box. I should probably return it but I really don’t care since I don’t do much talking on anything that isn’t headphones so whatevs.)

The Corsair 1000 watt power supply is actually from my purchase five years ago – I had one on the original build, but it blew out during a heavy 3D rendering session. Also tripped a breaker, whee. While I was waiting on the RMA, I bought a 750 watt to replace it and never swapped it out, so I still had the 1000 watt brand new in the box. Easy peasy.

Is it the fastest, most bleeding edge PC on the planet? No – but it’s way better than what I had and it’s quiet. (And only cost about $1200 in new parts, so that’s a bargain either way.)

Interestingly enough I was expecting to have to reinstall the OS, but Windows 8.1 actually booted up, installed the new hardware drivers and kept on ticking without any additional interference from me. It makes me a little nervous because I really prefer a clean install, but since it was a day before my surgery I wasn’t going to mess with it. It runs and for now that is good enough.

I have gone ahead and upgraded to Windows 10 as well – couple of bumps with that, especially with the sound card drivers (It’s always the god damned sound card drivers). Sound Blaster released them last week and they seem to work except when the PC comes up out of hibernation – no sound at all. (I also had to disable the onboard sound on the mobo – they were conflicting with each other.)

The upgrade also didn’t recognize that I had a video card, so I had to reinstall the drivers for that – otherwise the upgrade went pretty well. (There are some weird issues when gaming, though. Dragon Age: Inquisition runs on all Ultra settings like butter, but heaven forbid I get an email notification or anything while I play – Windows sorta barfs and swings me back and forth between the game window and the desktop until I manually try to stop it. Don’t know if that’s a video card thing or something else, but for now I just make sure I’m not running any programs with pop up notifications while I play.)

Oh, and Speccy completely crashes Windows 10. Completely. The upgrade even removed the program, but I reinstalled it and BSoD every time I try to run it. Hopefully they will upgrade it soon.

I will say I still hate the start menu, so I installed a copy of Start10 – I had the same program for Windows 8 and it makes it way easier for me.

Here’s to lasting another five years. 🙂

This entry was posted in blog and tagged computers, self build. Bookmark the permalink.