Now, remember in one of my previous posts I mentioned that one probably shouldn’t get too ranty on one’s blog? You know, so people didn’t think you were batshit crazy? Well, you’re about to see me go batshit crazy. And yes, I know I have a bit of a hot-button when it comes to technology not working. Nothing will set me off faster than when a program doesn’t work or a computer has issues. But even aside from that, what really pisses me off is when I pay a massive amount of money for a piece of technology that 1) breaks a lot and 2) has shitty support.

Warning: This is an exceptionally LONG and ranty blog post. 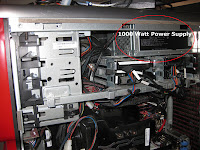 And so I offer Exhibit A.  This is the inside of my Dell XPS 710. Notice the 1000 Watt Power Supply.  Notice the rather large and beefy looking CPU down there in the corner. Also notice the nice and easy way one can slap hard drives in and out of the bays. (If you’re not technically minded, this might not matter, but if you’re like me, you tend to appreciate the easy swap of hard drives. 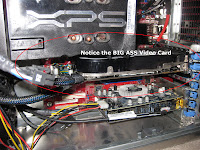 Notice the very large video card. Notice the fact that I can run duel video cards off this motherboard in SLI if I wanted. Notice that big ass cable that attaches to that video card. (It’s an older one – an Nvidia GTX 8800 –  but it still requires about a 500 Watt Power Supply to run and probably cost about $300 back in the day.)

Okay, so a little history here. I paid about $4000 for this machine in May of 2007. I needed a new gaming rig, and thought I’d try a Dell this time around instead of the Alienware/Sagers I’ve had in the past. I paid for a 3 year extended warranty. In the time I’ve owned it, the video card has had to be replaced 3 times. The separate Physx card once, the motherboard twice, and the monitor once. And of course it came with Vista as the OS, which has been nothing but full of suck. (Dell would not sell me a Windows 7 upgrade however, as it had not been tested on my computer configuration. Very weak, dudes. Windows 7 Ultimate runs on my freakin’ NETBOOK without any issue.)

Also note that when my monitor started ghosting badly, Dell’s solution was 1)send me a replacement monitor that was more broken than the original 2) Send me a second monitor to replace the first replacement. Except it wasn’t a widescreen like it was supposed to be. 3) Ignored my emails for 3 months, except to send me links to inferior monitors and asking if those would be acceptable replacements. 4) Sending me the correct monitor after I finally called 4 months later and bitched them the fuck out.

Okay, so on January 31, my video card shit the bed again, but this time it took the motherboard with it. I tried swapping out a different video card, different monitor and alternate slot on the motherboard to test before I called Dell, so I was pretty sure the mobo was dead. Well, that and the nice burning smell that occurred when the screen froze up. (It’s the little things, yo.)

So I call Dell. They tell me no problem, they’ll send a replacement mobo and video card, and since I paid for the extra support, a tech guy would come out and put it in. (I can do small things like swap video cards, but I really didn’t want to try messing with the entire mobo. Yes I’m a techno-wimp.)

Three days later, no motherboard. I did get an automated phone call from Dell telling me that “a part was on backorder” and no additional information. I called the following Sunday and asked WTF was going on. I was told that the mobo was on back order, but given the situation, they would upgrade me to a “newer” mobo – the one from the XPS 720. (And to understand the main issue – Dell doesn’t make the XPS 710, 720 or 730 anymore, so all this stuff is refurb where they can find it.)

They send me a 720 mobo and a tech. Tech puts it all together. But there’s a problem. The mobo doesn’t really fit the case so there’s no way to hook up the power supply. Computer is DOA. Tech calls Dell directly to try to order proper mobo. Gets told that it will be at least 3 or 4 months. They offer to just replace the whole machine with the usual assurances that it will be “the same or better” than what I have.

A week goes by. I email them. No one can tell me what the specs on the replacement will be, or when it will be shipped or anything else. It’s been nearly a month now. This past Thursday I come home and find a Dell box on the front step. I notice it is much lighter than my XPS. Not a good sign. So I crack it open and sure enough, NOT good. 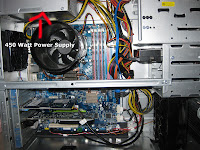 Notice there is only a 450 Watt Power Supply.  Notice the tiny, skinny ass wires everywhere. 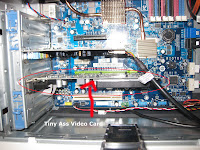 And here is Exhibit D:

Notice the shitty video card. An NVidia GS 220. It costs about $50. It’s a total piece of crap. Also notice the lack of SLI capability on the mobo.

Now, does this new computer look like it’s the “same or better”?

NO. Yes, the processor is newer, but this is clearly not a gaming rig of any sort. And the main reason for this is probably because the new line of Dell XPS systems *aren’t* gaming rigs at all. They seem to have pushed that completely off on the Alienware division.

I call my credit card company and discuss how I might be able to set up a dispute on my 3 year old purchase. After all, it appears Dell has no intention of honoring the extended warranty contract that I paid extra for. I also called Dell yesterday morning and spent 90 minutes on the phone with them. Dell India, in fact. My conversations went like this.

1) Called Customer Support, looking for someone to complain to. Replacement is not acceptable. CS rep sends me over to some sort of “expert”. He pulls up the tag numbers for both machines and totally agrees with me…but, because I bought the machine through an employee purchase plan, he can’t help me. He swaps me over to an XPS tech. I explain everything for the THIRD time. (Each time, I’m stuck giving them my Tag info, my email, my phone number, the whole damn story). He agrees. But I need to switch all my account info to the tag number on the new machine. Which he can’t do. He sends me BACK to Customer Service. They swap the account information. They send me BACK to XPS tech support. I get another tech. I explain again.

Yes, I am screaming at them by this point. Tech says, “You know, you could have just told us what you components you wanted.” I flipped the fuck out, because I hadn’t been given any sort of opportunity to discuss any part of the replacement at any time. She told me to spec out an Alienware as a replacement, but that her manager would have to approve it. He would call me in about two hours.

Sixteen hours later, he finally called. No, he can’t approve it, but he’ll plead my case with the dispatch center. They will call me in 1-2 business days. I’m not holding my breath. In fact, I don’t want it anything else from Dell except my money back.

However, I need a gaming/rendering rig, so I dropped about $2000 at NewEgg for parts on Thursday night. They’ve already been shipped and I should have them all by Wednesday at the latest and I’m going to just build my own.

And Dell can go fuck itself.

This entry was posted in Dell Fail. Bookmark the permalink.

15 Responses to Dell Must Die.