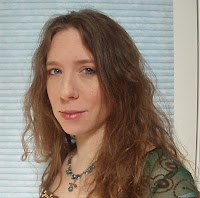 I hate getting my picture taken. Always have. Probably always will.

Which sort of defeats the purpose of getting photos taken for my official “Author” picture. (Gotta have one for the back of the book, anyway. And probably for the official website, whenever I manage to get that up.)

Jeffe was nice enough to bring her camera this weekend and help get me all gussied up. The pic on the left there was the best of the bunch, but I’m not entirely sure I’ll use it. And part way through the photo-taking, mr myn came home and decided to take some too. But he agrees that my posed pictures usually suck – and you can tell which ones they are, because I tend to tilt my head to my left, just so. Connor does it too, goofy boy, so maybe it’s genetic, but chances are if you see a photo with me like that, it probably means I really don’t want to be there. With that in mind, he normally tries to catch me off-guard, and I have to admit it works okay as long as I don’t know he’s there.

The main problem  is that I detest posing, although I think Jeffe pegged it better when she stated that it wasn’t that I disliked getting photographed as much as I just don’t like people *looking* at me. And she’s probably right.

I can give you the sob story of what an ugly, scrawny-ass kid I was growing up – *from being called “toad” or “frog” pretty much every day from 3rd grade to 6th (when my mom finally pulled me out of the school) – or the fact that I had a serious case of fang-face for a while. (Small mouth, too many teeth. Ended up getting 18 pulled over the course of my childhood, 8 of which were permanents). End result is I also disliked smiling for pictures that showed my teeth, and it’s still a hard habit to break.

Still, I suppose I’ll have to get over it. I’ve debated getting the pics done professionally, but that will probably cost a small fortune as there are rights involved, especially if it does end up becoming the back-of-the-book image. On the other hand, I may just opt for something way more casual – I’ve got some new arms socks coming in, and there’s a silly part of me that thinks wearing those and a Domo-kun shirt might be a bit more true to who I am.

*Note to bullies: Yes, even as children, much of what you say will be remembered. There’s a fair number of you going to be killed off in my books in terribly gruesome ways. Just sayin’.

This entry was posted in pictures. Bookmark the permalink.