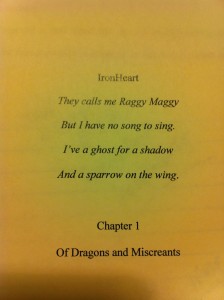 For some particular reason I decided to start out each chapter in this new book with a poem of sorts. They’re a bit like twisted nursery rhymes, shaped to the environment of the characters.

Of course, I did this for about 10 chapters or so and then decided it was a better use of my time to actually write the book and go back and add them later (which is what I’ll be doing in the next few weeks.)

This first one is actually a play on words since two of the other character names are Ghost and Sparrow, so I liked the tie-in.

In either case, the rough draft is finished now. It comes in at just over 92k words, but it’s going to get longer when I go back to flesh things out. Pantsting through a fantasy means a lot of the world gets built as I write it – and that means certain things like the political structure or technology end up changing conceptually. (And I *did* do some planning before I wrote it, but not everything turned out like I planned, so time to smooth things over. I’ve got some biology to rethink, if nothing else.)

I’ve been itching to edit it for months, but it’s better for me to complete the draft before I start mucking things up. So even though the ending isn’t quite what I wanted, there are so many details I need to add in the earlier part of the book that I’m not sweating it too much. Editing is the fun part for me anyway.

I’m going to have to look at drawing out a detailed city map too. I’ve got a good idea where everything is, but I suspect having something to look at is only going to help. I’ve got some dungeon/city builder software that was meant for D&D campaigns, but I think I’ll break it open and see what I can do with that.

Normally when I finish a book without a deadline, I’d let it sit for a few weeks or a month before I got back to it. In this case, I’ve printed it out – for some reason hard copy lets me edit easier. And while I don’t have a direct deadline, I did tell my agent I’d have something for her in June. (Plus, I’m still trying to work out my surgery schedule for the summer – I don’t want this draft hanging over my head while I recover.)

Otherwise things are what they are. There’s a lot of personal stuff going on via the home front that I may talk about later. Or not. Yesterday was the 11th anniversary of the passing of my mother, so I’m always fairly quiet during this time of year as a result.  I used to blog about it more, but I don’t think I’ve got much to say about it these days except that it still sucks.

New Fox & Willow up today as well. (We’ve been running a little behind on the updates due to real life stuff. Hopefully we’ll be able to get that under control soon.)

This entry was posted in blog and tagged drafts, fox and willow, ironheart, mother, personal, rough draft. Bookmark the permalink.