I’ve been staying offline a bit the last few weeks for various reasons, but on twitter yesterday I noticed a bit of buzz going on about what happens when a reader releases spoilers of a book before the book has been released.

Now, the actual thing is that the latest Sookie Stackhouse book is due to be released on May 7th – but it’s not just the latest book in the series – it’s the LAST book. For readers who have been heavily invested in these stories (this fandom, let’s call it) – it’s a pretty big deal.  Long-awaited answers should be revealed, plots lines should be wrapped up…in short, we want to know what happens to our favorite waitress and her vampire suitors.

Here’s the thing though. A German reader ended up with a copy of the book and released the last chapter spoilers.

And people are angry.

Not because the spoilers were released…but because of who Sookie ends up with. Or doesn’t end up with. Or whatever.

Now, I’m a Sookie fan, so I found said spoilers and frankly, it was something I’d figured was going to happen about two books ago. Would I maybe have preferred a different ending? Maybe…but guess what? It’s NOT my story to tell.  And yes. I’m still buying the book…because books are the sum of their parts – not just the endings.

However, there are a great many readers who don’t feel that way. If the Facebook messages on Charlaine’s wall or Amazon forums are anything to measure against, there are some extremely disgruntled people out there. Many expressed dismay at the way the series ends, as well as made statements at “feeling duped” for having wasted their time/money/investment on a series that didn’t end the way they felt it should.  Many are canceling their orders.

Here’s the thing. I’m not going to tell people they don’t have a right to feel a certain way. I completely understand fandoms and the obsessiveness with which they exist. That’s part of what makes them fandoms.   But I do think there is a point where it stops becoming a legitimate expression of anger and starts moving into abuse.

And I’m certainly no stranger to it. After all, one only has to look at the Mass Effect 3 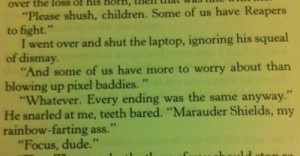 hubbub last year. There were a LOT of extremely angry people about how the series ended – and a lot of articles posted about what a gaming company owes or doesn’t owe its players. I stayed out of it, for the most part…except to completely poke fun at it in A Trace of Moonlight.

Where does the line get drawn?

Controversy is nothing new. But when does a character or a piece of media stop becoming the creator’s and start being owned by the consumer? In the case of Mass Effect, it makes more sense. After all, you create a player character and you spend years making choices and questing and building up a legacy in this world…so when the last game doesn’t deliver the way it was promised it would, then it’s easy to see where the disappointment comes from.

With books or series I’m not sure it’s so cut and dried. How many books does it take before a reader is so invested that they feel they are “owed” by the author? What exactly are they owed? I’m not really expecting an answer to that, because it’s going to be different for everyone. Though I’m still going to point people in the direction of Neil Gaiman’s “GRRM is not your bitch” post, because he puts it out there much better than I could.

Now, what about the reader mentioned above who did the spoiling? What role do readers play in these fandoms? Certainly there are spoilers and speculation that abound everywhere. That’s part of the deal. But in this case, the reader had the actual book in hand and decided to disseminate that ending out onto the internet.

As an author myself, yeah – I’d be pissed. Once the cat’s out of the bag, there probably isn’t much that can be done, but if I’ve spent years crafting a story, it’s going to be completely awful to realize that it’s undone in a matter of moments.  (And being judged on one part, that MIGHT be taken out of context. It also might not, but still.)

From a reader perspective? I have no idea if it was done maliciously or if it the person thought they were doing other fans a service by letting them know. I’m not sure it matters.      (And honestly, massive spoilers for a lot of fandoms are everywhere – there’s no way to really stop it from happening. Shit, sometimes I read the end of a book first, for the exact same reason. I want to know NOW.)

The thing is? Creators are still people. I don’t for a minute think any legitimate author or artist or musician or game developer is sitting there behind the scenes tugging their mustaches in glee over the idea of being able to fuck their fans over. (Or at least, not most of them.) Most of create because we love to create and we want to share our creations with the world.

Sometimes things are out of our control. There are often creative decisions that are made behind the scenes that consumers aren’t privy to, and that’s probably the most frustrating thing of all – because they can’t always be shared, nor should they be.

Speaking for myself, I totally admit getting bummed if a reader is disappointed in my work. But it’s always a given that I can’t make everyone happy. I still like to read reviews that are negative because it helps me to sometimes understand if there was something I could have written better or made more clear – but there’s a line between someone expressing disappointment or anger in a rational way (e.g. I didn’t like the ending because of X) vs someone spouting a 20 foot rageboner that devolves into calling me a cunt because Y.

I realize there’s no exact answer here. I can see both sides of the argument but at the end of the day, I am writer. The only thing I owe my readers is the best written story I can tell.

This entry was posted in blog and tagged entitlement, reader vs writer, sigh. Bookmark the permalink.