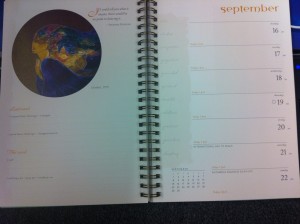 There was a Tumblr post going around on New Year’s about making some sort of “good things” jar. The idea was you were supposed to write down something good that happened to you (or a happy thought or whatever) on a piece of paper every day and put it in the jar. At the end of the year you get to sift through the jar and remember all your blessings.

It’s a pretty cool idea – and I debated doing it. Even went so far as to clean out a jar and get it ready, but that’s about as far as it went.

Not sure why. It’s not that I can’t think of happy/good things that happened on a given day, though I definitely think that sometimes we tend to take many of those things for granted. It’s probably not a bad thing to try to focus on them more than we do since the small things can help put the rest of it into perspective.

So why didn’t I do it? I’m not sure. Maybe keeping things in a jar just isn’t my style. In the end it would end up being one more “thing” to clutter up my desk. Or maybe I just didn’t want to start something I probably wouldn’t finish.

At any rate, what I did do is splurge on a Susan Seddon Boulet calendar (A Woman’s 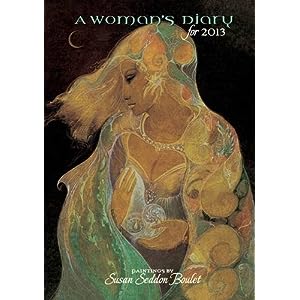 Diary).  SSB is probably one of my favorite artists of all time – I’ve got all her art books and her goddess and shaman cards, and at one point I think I had a screen saver with her art as well.

I always see something new every time I look at one of her works – there’s a fair amount of archetypal symbolism going on that strikes a chord.

I’ve had some of her previous calendars before, but it’s been a few years since I bought one like this. Frankly, I’m not using it to keep track of my engagements (the iPhone works well enough for that), but each week has a new picture with a quote, and then a section to list weekly hopes/tasks you hope to accomplish, plus room to mention the things you enjoyed or were disappointed about the week before.

Each day there’s a “Today I feel…” space. Which sounds a bit hokey, but I’ve been using it to try to figure out my pain cycles as well as my emotional ones. I get into some pretty deep depression spirals at times and I like using this method to figure out the pattern.  I’ve got a new pain workbook to play with too, courtesy of Danielle. I’ll talk more about that later, though – it’s going to be a very hard post to write and I need to think about it.

Random Song of the Day

This entry was posted in blog and tagged calendars, pain, rambling, random. Bookmark the permalink.