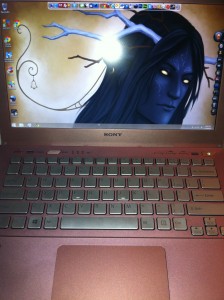 I’m probably not the only writer out there to name devices after their characters – I’ve got a computer named Brystion and an iPad named Phineas. It’s fun bit of arrogance, I guess. Around Christmas I had ordered a new laptop (which, as some of you know showed up broken.) The replacement came in last week and I’m happy to say it’s remained in good shape since then.

I’d have talked about it earlier, but I wanted to wait and make sure it was all good. Call me a bit superstitious at this point, but there it is.

Specwise, it’s not too bad. Certainly not a full on gaming machine or anything, but 8 gigs of ram and an i5 processor should see me through for a few years at the very least. It’s not quite as small as my netbook (which was about 10 inches), but at 13 inches, it’s pretty manageable.

And yes, it is pink.

(It also has Windows 8, which I’m not particularly fond of. I dropped a few $$ almost immediately for a third party hack to give me my start button back and I ignore the Metro monstrosity as much as possible.)

So where does the Magpie come from? Well, you’ve probably guessed she’s a character of mine from the new story. The main character, in fact.  (No, she’s not pink.) I’m becoming rather fond of her, so it seemed only right to give her a little tech love. New laptop, new story, new beginnings.

At any rate, it’s nice to have a working mobile machine again, even if I’m just moving to a different place in the house.  (Plus I did the last finishing touches of Molly Harper’s new website on it.  I helped her convert her old site to WordPress and spruced up the design a bit. Fun to do a little web design here and there to keep my brain fresh.)

And speaking of design, I got a lovely sketch of Gideon in the mail today from Aimo. 😀 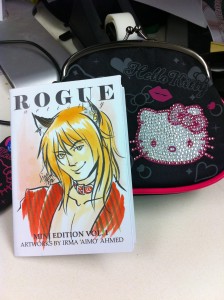 (And a Hello Kitty change purse, so color me delighted. In fact today was a bumper day for HK – Danielle sent me an HK decal too. It’s probably going on Magpie once I can figure out how to best fit it on.)

New Fox & Willow up today – we’re up to 75 pages…and technically it’s the first time Willow has actually introduced herself.  (We haven’t heard Gideon’s name yet in the story either, but that will be coming up fairly shortly.) I’m probably breaking some sort of storytelling rule by not introducing the characters right up front, but meh. Guess that makes me some sort of author rebel. Go me.

This entry was posted in blog and tagged computers, fox and willow, laptop, magpie, web design. Bookmark the permalink.

One Response to Pink Magpie