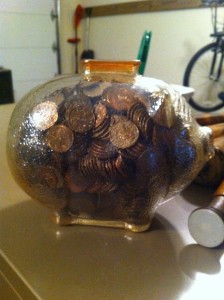 I’m over at SF Signal’s Mind Meld today, weighing in on the whole “strong women in UF” trope that is fairly prevalent in much of today’s UF books. Heh – it’s actually sort of funny, because when I set out to write A Brush of Darkness, I deliberately tried to avoid the whole “kick-ass lady in leather” concept – which is why Abby isn’t a slayer of any sort and why she’s so physically damaged.

Not that there’s anything wrong with the books that have kick-ass ladies in them – I’d just read so many of those book recently that I didn’t really want to write one, if that makes any sense.

As to the picture? That’s a shot of my piggy bank from when I was a child. With my dad selling the old house, I’ve now got a plethora of Really Old Stuff hanging around my house (which I will be documenting in subsequent posts.) Incidentally – this is one of those old-fashioned sorts of piggy banks – you need a hammer to get into it.  >_<

And so, it’s been that full since I was 2 or 3 – which is when I attempted to put it back on my dresser. (The one my son now uses, no less, ha ha.) I dropped that sucker on my foot and broke my big toe and it’s been sorta messed up ever since.

Do I have a point?

No. No, I don’t.  (Don’t  lift stuff that’s too heavy for you? Probably a good thing to keep in mind, whatever your age, really.)

This entry was posted in blog and tagged allison needs to get more sleep, guest post, piggy banks, random, what am I even talking about. Bookmark the permalink.