I realize I haven’t been blogging as much the last few weeks. This whole month has been a bit of a time cluster honestly, and the rest of this week isn’t going to be much better. I’m starting a new round of training for work. It’s a virtual classroom and all, but I find my brain basically getting pretty fried by the end of the day and it doesn’t leave me very motivated to do anything on the computer, let alone blog.

Plus, this is the first time in over three years that I haven’t been under a deadline of some sort. It’s a weird and slightly discombobulated feeling. And I’m working on this new project as I can (NaNo just didn’t happen the way it should have), but I’ve been putting this awful sort of undue pressure on myself to make it Good. Whatever Good really means. Just that I have the chance to try something new and break out of the UF mold a bit and although it’s fun, I don’t know.  I don’t want to fuck it up, I guess?

And it’s too new to really talk about or show to people. I know me – if I start looking for feedback this early, I’ll get discouraged because it’s not remotely ready for prime time. I’ll end up going back to edit the old stuff and I’ll never get around to pressing forward. Feedback is always going to be necessary at some point though – but I’m feeling really nervous about it this time.

But truthfully – honest feedback is what makes a book better.  I always tell newbie writers 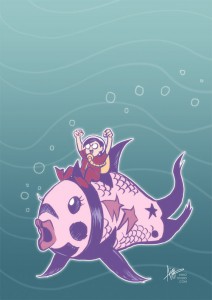 this – if you can find a beta person/group that you can trust to give it to you straight, consider yourself lucky and hold on to them. Also? Every story needs editing. Every. Single. One.

In a poor sort of anthology, the picture up above was drawn by Lucy. It was for Aimo, actually, who’s been feeling a bit artistically blocked herself. But Aimo took that drawing and turned it into this –>

And I love this for an analogy  because you can clearly see Lucy’s fish in there -from the oddly shaped stars to the stripes and the funny tail…and yet Aimo polished it up  by putting her own spin on it – much like a beta reader or an editor might do.

Anyway, I know I’ll muddle through it like I always do. Just feeling a bit melancholy about it for some reason. (Maybe it’s hormonal? Or just post-holiday blues – which were compounded a bit this time around because my dad is selling the house I grew up in, and I had to sort through some things on Thursday – and really, that’s a post in its own right, but let’s just say I’m bittersweet about it and leave it at that.)

I am feeling a bit burned out on the blogging though, so I’ll update as I can, but it might not be every day for a little while. Gotta refill that word well, as they say.

But, hey – new Fox & Willow up today. (And we got a nice little review on the Krypto Dies blog today too!)  🙂

This entry was posted in blog and tagged aimo, fox and willow, melancholy, metaphoric crap that is supposed to mean something deep but probably doesn't, new projects. Bookmark the permalink.

One Response to Little Fish