Slumming with the Sims 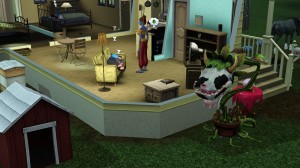 I fired up the Sims 3 this past weekend for the first time in a while. I’d bought the latest expansion packs but had never found the time to install them.

It took me a while to get everything working – a lot of mods I’d previously installed were broken and I’ve got some patches to get rid of things like intro video and to kill the nude mosiac. (The sims aren’t anatomically correct, per se, but in a normal game every time a sim goes to the bathroom or takes a shower, there’s a blur effect that gets put over them. I find that annoying, so I remove it – but each time a new update to the game comes out, the nude mod tends to break.)

Anyway, I got it working and then I invited Lucy to help me create some family members. 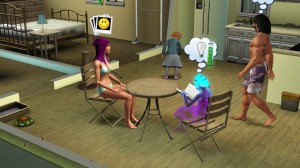 I have the supernatural expansion, so this allowed us to make more than standard humans – there are vampires and werewolves, witches and ghosts and fairy people you can create now. So I went and made one of each, plus some pets and threw them all into one tiny house with 2 beds and 1 bathroom.

And hilarity ensued. (I give my Sims a ton of autonomy and usually just let them do their own thing.) 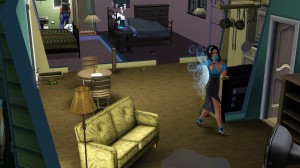 So, with Lucy’s naming help we have: A fairy named Crystal Fishhooks. A witch called Abby Sinclair (hahahhaha) and a genie named Magi Fishhooks. They’re all sisters. Abby has a ghost child named Emily. She died eating a bad jellybean off the jellybean bush out front. And because you can determine all their traits, all of them are animal lovers of some sort, but Emily is actually evil. So she goes around scaring the bejeezus out of everyone. (And for some reason still has to go to school?)

And then I have the Lovebone brothers. Rhino – the vampire. Who is an idiot, because he 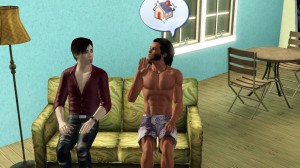 keeps going outside in the sun and getting fried. And then there’s Bitey, the werewolf. His traits indicate he’s both insane and a klepto. (He’s actually the most amusing of the bunch – he’ll stand around and stare at the window, doesn’t bathe much, and tends to do weird stuff in general. Like forget to make it to the bathroom and then ends up wetting himself everywhere.) 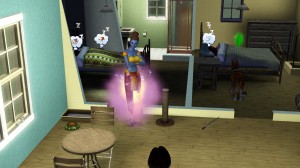 And we round that out with a lassie dog named Jo Jo, a cat named Fluffypaws and an Arabian horse named Prancey.  Jo Jo keeps getting fleas and bringing them into the house – and the vamp keeps getting them which makes him a tad less than happy.

It’s *very* crowded in this house and I’ve resorted to putting sleeping bags on the lawn because there aren’t enough beds to go around. (Except the new expansion has weather, so they keep getting rained on. They go outside, go to sleep, get wet, get pissed, go inside, but are still tired so back out they go.)

And then there are the zombies. Apparently on nights of the full moon, not only does Bitey 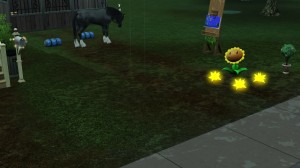 transform into a hairy man-beast, but zombies show up. (Everything is tied into the Plants vs Zombie game, I guess. I bought a sunflower, but the zombies ate it. There are pea-shooters and Wall nuts I can buy to combat them, but I haven’t done that yet. My supernatural family actually has been ignoring the zombies for the most part, even when they’re being attacked. 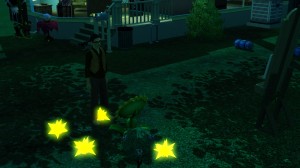 (It’s kind of dark in this picture – but this dude just crawled out the ground and then ate my sunflower. Bitey was very upset about this and kept running in and out of the house. (You can see what the sims are thinking about and the sunflower was *very* much on his mind.)

I don’t know. It’s a silly game, but I like to watch them do their thing.

Oh – and here’s some more shots of werewolf Bitey after he’s transformed: 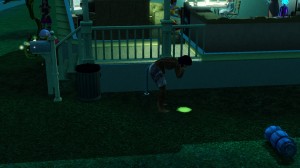 <– Here he ran outside and started vomiting for no reason I could figure out. 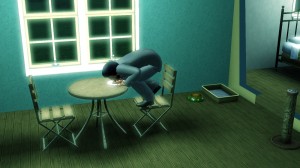 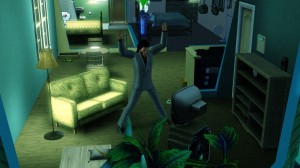 Anyway, I won’t be online for most of tomorrow, so I’m wishing everyone a Happy Thanksgiving. Hope everyone gets a chance to enjoy their family and some good food!

This entry was posted in blog and tagged silly, the sims. Bookmark the permalink.

2 Responses to Slumming with the Sims