There’s actually three different Twitter hashtags – #1ReasonWhy (as in 1 reason why it sucks to be a woman in the gaming industry. Sad stuff here, and some of the usual trolls, so be warned.) On the brighter side, two happy hashtags resulted – the #1ReasonMentors, which is people looking for and volunteering to be gaming industry mentors. If you’re looking to get more info and you’ve been intimidated in the past, this might be a good place to start. Also check out #1ReasonToBe for reasons WHY women are a part of the gaming industry.

The thing is, I sort of take issue with people saying how this hashtag is exposing the dark underbelly of sexism in gaming. It’s always been here – we’re just being more vocal about it, I guess.  And it’s certainly not limited to games – all you have to do is look at this lovely little number written by Tony Harris on fake geek girls: 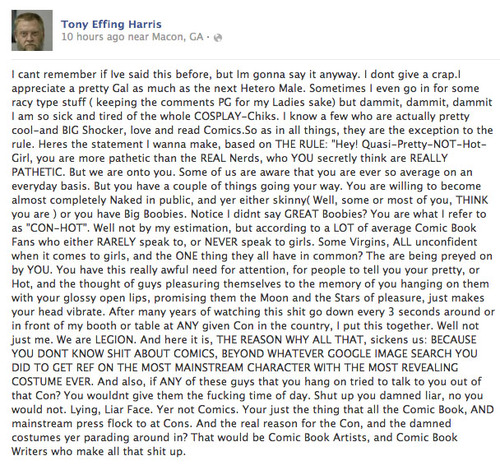 Wow. (This was on his Facebook, but it’s since been taken down.) But, yeah. So where is the line in the sand drawn? Who gets to dictate who’s a real fan? Cosplay is a whole ‘nother can of worms, but there we go – if you’re not pretty enough, you shouldn’t cosplay. If you’re 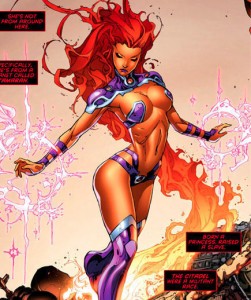 too pretty, you’re obviously only in it to prey on those innocent young virgins who attend comic book conventions as an escape from ladies? And, um – calling the cosplayers out for wearing revealing costumes? The fuck is that? WHO IS CREATING THESE COMIC BOOK HEROINES WHO WEAR SKIMPY COSTUMES? Um. That would be YOU. The comic book creators. Pot? Kettle? It’s a whole damn  brick oven in here.

Ridiculous. But women gamers are often viewed with the same sort of suspicion and doublespeak. Never mind the women actually making the content. Last week,  a post went around by Bioware’s David Gaider talking about how important it was to have women writers on his team. While I appreciate the sentiment, you know what I’m really tired of? I’m tired of reading these anecdotes and stories told through a male filter. It’s all well and good to asspat yourself for having all these women writers on your team, but what’s their opinion? How do THEY feel about things? What hurdles do THEY face when they have to speak up for or against a piece of reviewed work? (For that matter, where are the female Lead Writers? Are there any? Yeah, I’m getting a bit ranty about it, sorry.)

But the thing is, the reasons so many of the women writers don’t openly talk about their opinions is clearly dictated in twitter stream as noted above. (Or, say, what happened to Jennifer Hepler. I was briefly involved with that when things started going down on twitter, but quite honestly, the amount of vitriol was astonishing. Can’t really blame anyone for not wanting to throw themselves to the wolves after that, but I really wish there was some sort of safe space out there where some of these gaming professionals *could* talk about their experiences without fear. Even anonymously would be cool. Otherwise, it just feels like we’re only getting part of the story.)

Anyway, I’m glad to see things are maybe changing. At least the outpouring of mentor support is pretty fabulous, and that’s a great thing to see.

In the meantime? The Enhanced Edition of Baldur’s Gate is released on PC today! (New content! Enhanced content! Huzzah!)

This entry was posted in blog and tagged baldur's gate, gamers, girl geeks, sigh, we're still dealing with this, why?, women in gaming. Bookmark the permalink.

2 Responses to 1 Reason Why