Authors Against Bullying: I Have No Fucks Left To Give 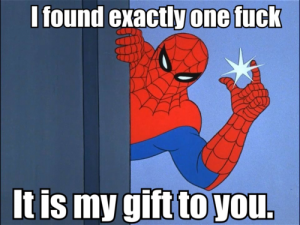 So today is Authors Against Bullying day. Which I forgot to sign up for – though Jess Haines was nice enough to send me an email about it – it just got lost in the NYCC craziness. There’s a whole blog hop going on which I’m not a part of – you can check it out here.

That being said, I suppose I’m going to just post my own thing here. Understand that it’s going to be somewhat ranty. I have a lot of anger still.  I’ve debated using real names – in the past, I’ve never mentioned who these people are, but I can’t decide if that’s the way to go or not. I mean, why should I protect anyone at this point? (But hey, I’m in the public eye a bit more, and nothing is worse than a batshit crazy author, so perhaps real first name, last initial will work? We’ll see how it goes.)

This whole topic comes up at an interesting time. Last week was my 20th high school

reunion. Which I didn’t attend, because I was on a panel at NYCC – and to be honest, there’s something sorta cathartic about hanging out with 116 thousands geeks.

You know. As opposed to hanging out with the people who made my life a living hell for most of my childhood.

Frankly, reunions are sort of over-rated these days anyway. With social media overflowing with self-indulgent wank about our lives (myself included), it’s hard to get excited about seeing some of these people in person. And at this point, I’ve managed to reconnect with the people who actually matter to me…none of whom went to said reunion, so clearly there’s something to that.

Anyway, yadda yadda. The thing about bullying is that it really does damage a person. You can argue all you want about standing up for yourself and building character, but when I think back  over all the shit that happened? I probably would have preferred having friends.

The odds were stacked against me. I was fish-bone skinny. I wore glasses. I had zits. I was weird. I had very small ears. I had a small mouth with a ton of crowding teeth that grew every which way.  I was awkward, in general. My parents didn’t understand fashion and often let me wear the same things two days in a row. I was a hypochondriac at some point as well, go figure. (Anything to get out of the classroom, honestly.)

I want to say 1st through 3rd grade were okay? Well, except for the fact that one of my friends was super blond and pretty and popular. And loaded. (If I ever got a new toy, she’d show up the next day with one twice as big. Or three times as many. Without fail.)

And one day her daddy bought her a used bike and cleaned it up. (Which I didn’t know.) And she showed off that bike. And I pointed out there was still a bit of rust on it. Because I was 8. And there *was* still rust on it. And Sandi H. ran home and cried to her momma. Who called up MY mother and screamed at her for so long that my mother ended up vomiting. Bullies run in families  by the way. (And then somehow I was blamed because shouldn’t I have known better? *shrugs*)

In 4th grade, I got my nickname. Thanks to Melanie L, who declared one random day that I looked like a frog. Nothing more than an ugly toad.

And I was forever Frog, from that point on. Ribbit, ribbit, indeed. Scott K. used to post

notes on my back and kick me. Keith R. used to make toad noises. Karen W. used to draw awful pictures of my face with my “bulgy eyes.” Jeanna L. used to crank call my house and pretend to be a boy who liked me. Jade P. used to scratch me. (Until I finally lost it and headlocked her in the 5th grade and she lost her voice. Oddly enough I didn’t get in trouble for that.) Theresa M. would come up to me and make fun of my clothes and the way I wore my ribbons in my hair until I was in tears. (Even though I was completely alone, far on the other side of the playground. Apparently that meant she needed to seek me out and put me in my place.)

Wow, this is a very petty list, isn’t it? Even more so when you realize this shit happened back in 1982 – 1985.  The fact that I remember all this so clearly sort of scares me…but if you think about it, those are very formative years during childhood. You become as you are made. (And this is really only the tip of the iceberg – there’s a lot more but frankly I’m getting depressed just thinking about it, so I’m going to spare you all and stop. There was some physical assault and teachers who didn’t care and I was pretty much in a constant state of torment, but…yeah.)

Bonus round? The one teacher who actually seemed to take an interest in me in the 5th grade? Turned out to be a child molester. AWESOME. (Not of me, though. But Jesus Christ, the humanity.)

The end result is I’m still a bit neurotic. I never feel that I’m good enough for anything. I’m bitter and I don’t trust people much at all. Even when I’m friends with them, there’s always that little voice in the back of my head just waiting for them to turn on me. (I’m a bit better these days at not caring so much, but the doubts creep in when I’m not looking.)

So it doesn’t really surprise me that in today’s world of technological goodies there’s probably an increase in suicides. After all, back in my day, at least when you went home for the evening, that was pretty much it until the next day. (Unless someone egged your house or crank called you – both of which happened sometimes.) But today? There isn’t a refuge from it. Someone somewhere can get behind the anonymous screen of the internet and continue to mock you.

Even if you choose to take the high road and don’t engage.

I’m not sure what the solution is, or why people feel the need to be so mean. I mean, I guess you see it in the wild, right? Where the baby birds push the messed up bird out of the nest because it can’t survive anyway?

Bullying feels a bit like that sometimes. Which always seems to fly in the face of people who insist they’re Christian and good and everything should be hunky dory. You know. As long as you’re not DIFFERENT.

But step outside that circle and it’s open season.

So I guess I’d like to assure kids today that it does get better. College was certainly better for me, anyway. I could revel in my geekdom with like minded people and eventually, not a single fuck was given anymore about the people who were outside of OUR circle.

I think this video sums it up best:

This entry was posted in blog and tagged bullying, honey badge, I'm rambling, no fucks, ranty, sorry. Bookmark the permalink.

21 Responses to Authors Against Bullying: I Have No Fucks Left To Give