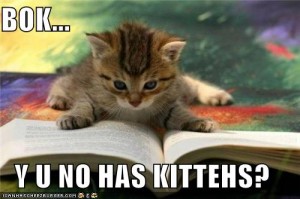 Of course, the problem with handing in revisions is that once I’ve pulled the trigger to send them off, my brain refuses to shut down.  Five minutes after I moved away from the computer, my author-mind was like “Hey, you really should have fleshed out that scene there. Just a couple of lines. That’s all you need. Really.”

And maybe I do.

The good thing is that I still have time for small changes; it will be a little bit before the copyeditor gets the ms back to me. It’s probably good for me to take a small break from it anyway – after looking at it so hard core for the last few weeks, I’ve lost perspective on it.

I’ve reached that saturation point where every sentence looks like crap. I’m second-guessing all my plot points – too much? not enough? OMFG the almost-sort-of-love-triangle? Will the readers be disappointed if X happens?

Not that I really want to focus on the doubts, but they linger. Maybe it’s that concept of wanting to please everyone…or at least not disappoint anyone.  Which is an impossibility, I realize, but I still think about it.

I’m also thinking about a proposal for a fourth book. Technically, my contract is filled once final acceptance has been made on the ToM ms, so it sort of begs the question. Are there more Abby stories coming?

To be honest, I’m not sure. I suspect Abby is going to need a long, long rest after everything that happens. (Which is about as detailed as I’m going to get. Things get tied up…but there are still some loose ends hanging there that could be picked up again. I’ve actually got a few short stories in my head that I think could work pretty well, so it’s not like the story ends, you know?)

On the other hand, Melanie’s story still needs telling, so there’s a  good chance I’d spend some time focusing on her, if given the opportunity. (Which means plenty of space for cameos – Abby and Co would still be hanging around, just out of the immediate spotlight.)

In the meantime, I’m going to take the rest of this week off from writing- gotta catch up on my sleep and refill the well. (And Mass Effect – I’m woefully behind there.)

This entry was posted in blog and tagged revisions, sleepy, writing. Bookmark the permalink.