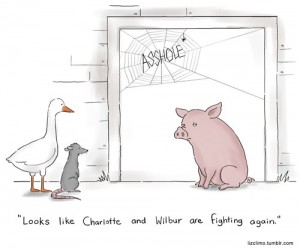 I’m at that stage in my revisions where everything starts looking like crap. Part of that is just the pressure of knowing it needs to be finished in the next few days, and part because it’s *all* I’ve looked at for the last two weeks.

Not that I don’t love my story…but when you’re nitpicking every little word it can be hard to tell. Is this necessary? Should I put something else in here? Do I need to go back and drop a line or two about something that happened two books ago? Or will the reader just know?

And bringing new readers up to speed is probably one of my biggest failings. For one, I usually hate doing it. It always feels a bit false to me. “Let me just drop a summary paragraph….HERE!” It’s can be hard to do it in an organic fashion without feeling like an infodump sometimes – like in those terrible plays where a woman answers the phone and is talking like “Remember your cousin Robert? Robert with the black hair and the extra finger on his left hand? The one with the gimpy leg that he busted in the war while rescuing a infant child? And who’s cheating on his wife with the butler?”

Sure, now the audience knows some stuff about Robert…but only because we ham-fisted it down their throats.  (And WHO talks like that?)

For me, it’s partially an immersion thing. When I’m reading a book, I don’t want to be distracted with stuff the characters already know. (And that in theory, *I* should know if I’ve read the previous installments.) But that’s not always the case – not everyone picks up a series at the beginning, and even those that do can forget pertinent details if it’s been a while between books.

(I seem to recall in some larger epic fantasy series where the authors don’t even bother – they just wrote an entire rehash chapter that summarizes the last 20 books because it’s  too much information to try to work in gracefully.  )

But as an author without the benefit of a mega-epic at her feet, I have to walk this fine line of leaving enough tidbits to “remind” readers of what has happened before, but without completely rehashing every little piece.

Am I any good at it? I have no idea – I always get a odd sense of amusement when I read my reviews – especially when they flip-flop in extremes. Some people insist that I don’t rehash at all and you absolutely have to start at the beginning…and others enthusiastically mention that I give readers plenty to run with, even if they haven’t read the other books.

I’ve been trying to remember how some of my favorite authors do it, but my main problem there is I’ve often re-read those books so many times that  I already know the story/world so well that it doesn’t make any difference. (Or maybe the authors were so skilled at it that I didn’t even realize they were doing it?)

Food for thought anyway. What do you like as readers? What makes a good summary vs a bad one?

This entry was posted in blog and tagged reading, rehashing, writing. Bookmark the permalink.

2 Responses to Up to Speed