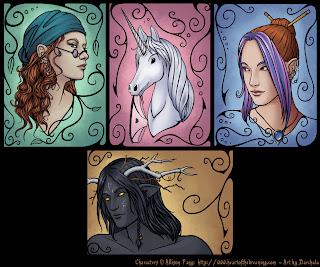 Okay – only a few weeks left until convention season starts, but I wanted to show off one of the new items I’ll be handing out (starting at Romantic Times):

Apparently these are the new cool things to have, and I had a custom set of four designed by the marvelous Darchala last week. 🙂 I’m still working on the backs, which should include names and quotes and all that fun stuff, but hopefully I’ll have them off to the printer this week. (Got a favorite character quote? Let me know!)

The cards are small – only 2.5. x 3.5 inches, so we wanted to keep the designs simple. Portraits seemed like the thing to do – and obviously we’ve got Abby, Ion, Phin and Melanie to start. I’ll add to these as I can, but I have to order them in sets of 500 per design, so it might be a little while. (Definitely by next year when the next book comes out, though!)

Anyway, I am delighted with them, so squees all around. 🙂

And speaking of Romantic Times and conventions in general, go check out this bit of silliness that I wrote up for Wicked Little Pixie’s site.  (Not quite a scene, but not quite not, either. It does involve Abby and Phin. They are..packing. I guess.)

This entry was posted in blog and tagged a brush of darkness, awesomesauce, guest post, squee, swag. Bookmark the permalink.

One Response to Swag the Dog