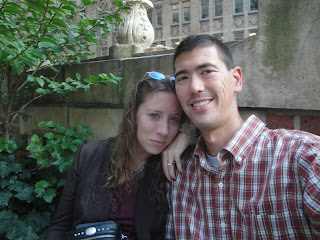 So obviously I got to hang out in NYC for the weekend (partially for my 10 year anniversary with mr myn – yay – and partially for writing stuff.)

So…here’s a mini recap of what we did.

1) Bolt Bus from Philly to NY – only $11 a person and 2 hours…very hard to beat. Bus had Wi-Fi and I was easily able to finish up the last of my first-pass-pages, so excellent resource.

2) Library Hotel – cute little boutique hotel, not too far away from Times Square. Had a tiny rooftop bar on the 14th floor along with a greenhouse and a reading room. Which is where we hung out for a bit after we checked in. (Along with a very taste cheese and fruit plate and wine.)

3) Basso56 – Killer hole-in-the-wall Italian food for dinner. Not cheap but not super expensive, and a lot of bang for the buck portion-wise. And we ate *a lot*. Of course, this has to be prefaced with the fact that we ended up getting lost along the way. *sigh*. Lost our bearings and walked 10 blocks in the opposite direction, figured it out, walked 10 blocks back and then the *correct* 15 blocks to the restaurant. So, we earned our food. LOL. 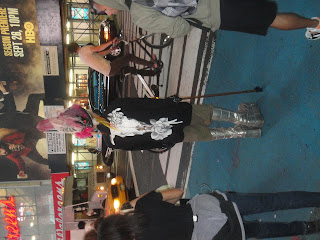 4) Afterwards, we were feeling really mellow (massive food coma and wine will do that.) and so we headed towards Time Square.

Which is where we saw this guy –>

Didn’t get a shot of his face, but he was *old*. And kinda looked like he had a syphilis bloom on his cheek, but maybe it was blush. Who knows?

So windows shopping and then we were pretty beat so we crashed early back at the hotel.  (We are old and lame, I realize this.)

5) Light free breakfast at the LH next morning since we were both stuffed from the night before still. 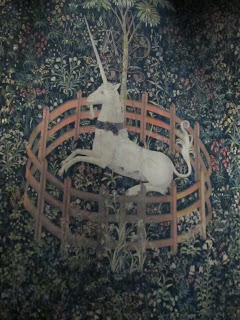 6) Decided to head to the Cloisters. (And yes, we took a cab, ’cause it was up in Brooklyn.) Had a brilliant time looking at all stuff there for several hours – I’m a sucker of medieval type things. Plus that’s where the unicorn tapestries are, and unicorns were very much my Thing when I was growing up, so it seemed like a no-brainer.

7) At 12:15 I realized we were supposed to be back in Manhattan for lunch with awesomesauce editor Danielle and awesomesauce agent Suzie by 1. Which is sorta laughable.  There are no cabs to pick up at the Cloisters. There *was* a bus stop there and even though we didn’t have a fare card, the driver let us on and dropped us off at the nearest subway station. Hello, A line. Some quick texting to Danielle led us to taking it all the way to the 14th street stop. A few blocks (and about 30 minutes late) and we got to our destination.

8) Rosa Mexicano – OMG lunch was SO good. Dessert was great. Company was brilliant and even though I was an ass and forgot to take a picture, Danielle gave me a copy of my ARC. 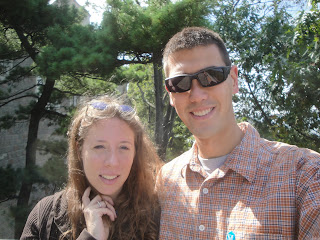 9) After 3 hours of talk and food, mr myn and I wandered around Union Square and the utter madness of the farmers market there. (We also popped into The Strand and Forbidden Planet before meandering our way back to the hotel.) Almost stopped at the Museum of Sex since we walked right by it, but general consensus from people that I know who have been there is that it’s a bit over-rated. Plus I was tired (and it was like 40 blocks back to our hotel, and we had to get back in time to go to the show in a few hours.) Actually, by the time we managed to make it back, we only had an hour to wash up and get ready to go to:

10) Wicked.  Loved it. Great music, great set, great actors. One of the best productions I’ve seen in a very long time. Plus mr myn bought me a t-shirt. 🙂

11) Back to Times Square for more wandering and people-watching.

12) Max Brenner for a late night (11:30) dinner and chocolate goodness. And I admit I thought it was a bit weird to have to make a reservation for that late, but even when we left at 1 AM it was still hopping like mad. And then we wandered about Union Square for a bit – different sort of crowd, but still kind of neat to watch people playing chess at that hour. Eventually we did snag a cab back to the hotel where I passed out rather abruptly. 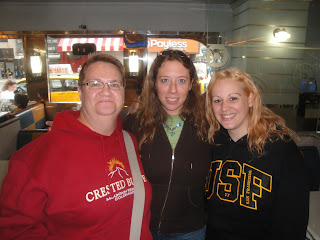 13) Breakfast at the Tick Tock diner with Suzie and Colleen, and there was much bacon to be found. Several hours of gabbing and eating and then it was back on the Bolt Bus to Philly to retrieve the rug rats. And then 4 hours of driving back to Virginia. Actually got a little writing done on the bus and a little more when I got home, so all in all? Probably one of the best weekends of my life. 🙂

This entry was posted in awesomesauce, vacation. Bookmark the permalink.