I’ll admit that when mr myn showed me the hair brush dagger online a few weeks ago, I said it was kind of cool. You know, in that  – yeah that’s nifty, but what would I do with it voice?

Well, sly and crafty man that he is, he bought one for me.

And I’ll admit, it really is pretty cool from a self-defense view point. It doesn’t stand out as a weapon. Even though it’s not actually bladed with a cutting edge, I could easily imagine oh…slamming it up the chin of an assailant and into their soft palate. Or an eye. Or in the ear. Or neck. 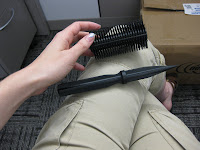 It’s very pointy, is what I’m getting at.

It’s made of carbon, so there’s no metal of any kind on it. From a writer’s point of view, the first thing I thought of was – hey, someone could get by security with this! You know, when the hapless heroine has to get through the metal detector to get to the big bad, safely ensconced in his big corporate building? She could just put it through her pocket and walk right on through…

It could work  Maybe. 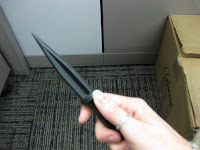 Given that the website you buy it from says not to take it to an airport I imagine other people have probably thought of that too. Or tried it..

But it also says not to take it to California. (Why? Will the state just fall into the ocean if you bring a carbon pig-sticker into it? No, don’t answer that.)

It’s a big downer really. Since the  very first thing I planned to do with this thing was hop an airplane and go to California.  I would go on an incredible journey and find my inner child, getting into lots of kooky adventures and meeting hippies. Just me and my hairbrush knife.

Alas, my dreams are now dashed.

This entry was posted in no sleep 'til brooklyn, random, wtf. Bookmark the permalink.