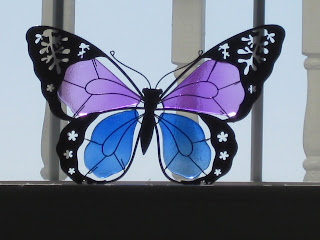 Friday night we tried to go out to a fancy restaurant with the kids.

There are two things potentially wrong with that sentence, and I’m guessing you can probably figure out what they are.

Needless to say, it did not work out overly well. It’s a total crapshoot sometimes as to whether it’s going to work out, and this time it didn’t. Part of this was probably because it wasn’t a particularly kid-friendly place, so they were slower to bring the kid’s entrees out, they didn’t have chocolate milk, and there were a lot more people nicely dressed up that we were undoubtedly interrupting.

Actually, Connor was fine. Lucy was being her typical 3-yr-old Princess self. The fact that she had melted down right before we left the house should have been my sign to either abort the mission or head out to the nearest Red Robin instead. (They have good burgers, yo. Plus it’s so noisy there, my kids could implode and no one would notice.)

But we wanted to try something “nice.” And the food was good, but it’s really hard to enjoy when your daughter is trying to lie down in your lap and then wailing about how her butter knife is on the floor and then snatching the menu from your hands, etc, etc.

And I love her to death. I do. But it was not a Good Night.

By the time dessert rolled around, I’d had enough of dealing with her/inflicting pain upon the masses, so I left mr myn and Connor to consume whatever chocolate decadence they’d ordered and Lucy and I bailed. It was pretty chilly out, but it didn’t seem to slow her down, and I let her jog several blocks beside me in an attempt to burn some of that energy off. 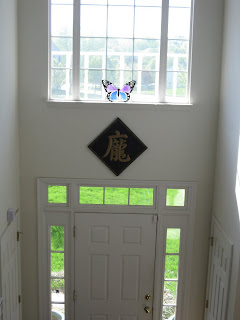 Most of the local stores were closed at this point, but I did stumble into a quaint sort of gift shop that was just about to close. I had originally popped in just to take the edge off the chill, but there were all sorts of interesting things in there. Lucy was still being a right pita at that point, so I made up for it by buying an iron butterfly with stained-glass wings. Call it bitterness that I didn’t get any chocolate, if you want. LOL.

I didn’t get a chance to take a picture of it before we put it up yesterday morning, so what’s up there is just the closest I could get with the camera.

And you can see from the picture to the right that it’s up pretty high now, so I don’t think I’ll be taking it down any time soon.

That black diamond is my last name, btw. 🙂 It’s essentially the word for dragon, with the word for veil wrapped around it. Which I always thought maybe meant “Veiled Dragon”.

This entry was posted in Lucy, random. Bookmark the permalink.