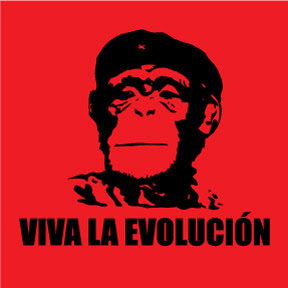 I really hate the evolution vs creationism stuff. It’s a completely unwinnable argument from any side of the equation. And I do like a good debate on the subject from time to time, but in reality the discussion of it seems to get people heated. People believe what they’re going to believe, regardless of whatever is presented.

For myself, I’m pretty firmly on the side of evolution. It’s the biologist in me, and as much as I was raised a Catholic, I don’t really see the Bible as much more than another Creation myth. Not knocking anyone who does, but this is just me.

Anyway, the only reason I even brought this up was because of this article over on ABC News. The title is a bit of a misnomer in itself: “New Fossil May Show How Apes  Became Humans”. I find this irritating in the extreme, because evolutionary theory has never stated that man evolved from apes…but that we *both* evolved from a common ancestor. That we share 99% of our genome with chimps is pretty telling of *something*.  Is the fossil in question said ancestor? Maybe. Maybe not. But I wish news organizations would get their damn stories straight.

Of course, one only has to look at the comments beneath that article to see how passionately people can feel about the subject – and there’s a great deal of ignorance being thrown about, on both sides. It doesn’t lead to a very good discussion, I’m afraid, but that’s just the way it goes.

This entry was posted in evolution. Bookmark the permalink.

8 Responses to Creating my Evolution.