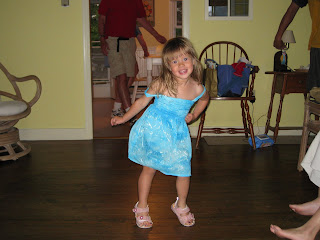 My nearly 3 year old is crazy. Well. Maybe not. But I’m beginning to wonder how much trouble I’m going to have with the little darling when she hits her teen years. She’s already rather interested in boys. Case in point – when she saw the David Garrett video I was watching, she asked if she could “eat him.” (erm, get in line, honey). Actually what she said was “Who is that? Can I eat him? Can I eat his sweater?” The mind boggles, I guess…

During our summer vacation, we visited one of our favorite pizza joints. Food was good, as it always is, but the table next to us was being served by a young guy named Rocky. Now admittedly, Rocky was pretty damned good looking, but as soon as Lucy saw him, her mouth just dropped open. Ignoring us and the her dinner, her eyes just followed him every time he walked by. Eventually he picked up on it, and smiled at her each time he went past, which merely encouraged her. At one point she came up to me and and asked if we could bring him home with us. (erm, yes? LOL – say what you will, she’s got good taste.) 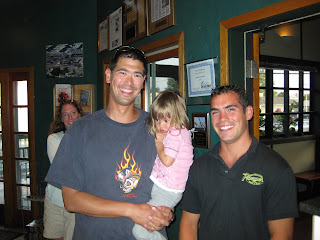 At the end of the meal, we decided to embarrass the shit out of Rocky and had her take a picture with him. She was very excited initially, but then got all shy, so mr myn ended up holding her. (Rocky was a good sport. 🙂 )

And of course, this isn’t to say that Connor isn’t interested in girls. He is. (The blonds in particular…but he just likes to look at them and tell me he thinks they are pretty. Very sweet. None of this asking me if he can take them home stuff. LOL.)

And then there’s daycare. She has a friend apparently – a little boy who comes up to her in the mornings and takes a big hank of her hair and leads her around the room. She meows, telling me she’s his pet cat. And I have to blink and think on this. Is it worth interfering? Or is this just some random girl thing she’s going to grow out of? I certainly don’t remember Connor doing this to any of the children in his early classes. (Or if he did, he kept his mouth shut about it). I don’t remember acting this way at that age either, but then, I was home for those years as my mother took some time off after my brother and I were born. Don’t think I want to ask my dad.

This entry was posted in boys, Connor, Lucy. Bookmark the permalink.