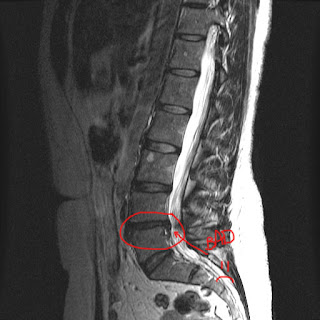 ….And it’s official. My back is toast. Got my MRI back and went to the doc’s yesterday. And, well. The disc that cracked last year has obviously compressed – but that was sort of expected. What we were hoping for is that with time/PT/etc the herniation would reduce itself, as it often does. As you can see from the picture, it hasn’t. Not only that, the disc is apparently fragmenting – and according to the doc, part of it has broken off and is now sorta floating in my spine there. Hence the pain that never goes away. He said it was akin to a pebble in your shoe – but my spine is the shoe, in this case, obviously. So whereas the pain may not always be horrible, you know it’s always there, and when you stomp on that pebble it hurts like a mofo. (Or in my case, when I move wrong. Or walk. Or sit down. Or sleep.)

The official report reads: Focal central/left paracentral disc herniation with migration about the left aspect inferiorly, with probable fragmentation, with evidence of left L5 nerve root impingement.
The doc gave me two more steroid shots (after the one I had two weeks ago) and I convinced him to get me some more PT, at least to try to work on the muscles, which have apparently gone into full guarding mode and are wreaking havoc on my left side from my shoulderblade to my kneecap. I go back in 3 weeks. If the steroid shots do not help then we are done pursuing that course of action. Which leaves me two options. 1) Wait it out and treat the pain as best I can and hope my body “eats” the piece of disc or 2) Surgery to remove the piece and patch up the disc as best as can be done. This has an 80% success rate. The other 20% apparently get scar tissue and no pain relief.
I’d be more inclined to go for option 1, except that it’s been a year and a half and the disc isn’t really showing any improvement. So if I wait on it, does that mean it’s only going to be worse later? (i.e. more fragments or something). On the other hand, option 2 involves 3 to 6 weeks of recovery time, which includes no driving for at least those first 3. Good news is that I can work from home, so I wouldn’t have to go on short term disability or anything, though I imagine I’ll be taking at least 3 to 5 days off after the surgery anyway. The bad news is the kids and mr myn’s schedule. Connor will be back in school by that point, so mr myn will drastically have to reduce some of his hours so that he is around, since I’m probably going to be completely useless for at least 2 weeks. The off-shoot of that is that at least the daycare is a few blocks away – maybe 1/4 mile – in a pinch, I’d imagine I could walk the kids there or walk them home if I needed to (once I’m allowed to, anyway).
Either way – it’s probably going to suck.
This entry was posted in back pain, wtf. Bookmark the permalink.