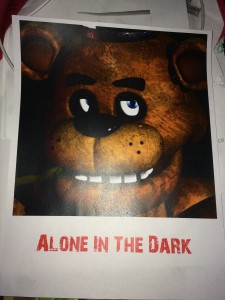 When it comes to writers, fanfic can be one of those hotbutton issues. Some authors like it/write it/encourage it – and others treat it like dogshit on a shoe.

I have a bit of a love-hate thing going on with it myself. Not because I care if people write it or read it so much as that I have a mental block on it sometimes. Like, I totally understand coming to the end of a book and wanting more – more of my favorite characters, more of that world, more everything. Just like I get wanting to “fill in the gaps” between characters that maybe didn’t get a lot of screen time. All of that makes sense, and I’ll admit to being a rather ravenous consumer of Gargoyles fanfic back in my college years for just that reason.

But in the back of my head, there was always that lingering doubt – these stories, no matter how well written or creative they were – weren’t canon. They didn’t count. And that bothered me on a number of levels (which is silly and odd, I get it, but that’s just how it was.) It probably depended on the fanfic, to be honest – some writers manage to capture the original characters with amazing accuracy…and others don’t.

In either case, that particular attitude prevented me from writing much of my own. As much as I might want a character’s story to continue, I couldn’t easily let myself write it. Not my characters, not my world. Not my story to tell.

Now, I’ve lightened up on that a bit. I’ve dabbled in it over the last couple of years, but mostly short pieces, and most of the time they’re private or for a few friends only. (Sometimes it’s a trade – fanart for fanfic, and that works.) I keep them short on purpose, though – for one thing, if I’m going to spend time writing 100k words, it’s got to be on something I can sell. But they can make great warm-ups, they’re fun and they let me indulge in something that doesn’t matter.  (And when you are writing under a deadline, sometimes you forget that writing can be fun – it’s important to keep that element involved in the creative process, I think.)

And I don’t write fanfic of books. Just can’t do it. Computer games, sure. TV shows, maybe, but I’ve never really had much urge to do so. Games make more sense to me, since if you’re playing a 1st person sort of RPG, there’s plenty of places to work within your player-character’s psyche that maybe doesn’t get shown on the screen. (Especially if you’re playing 50 + hours with that character – it’s hard not to get at least a little bit invested.)

But in either case, I was a bit surprised the other day to find my son writing fanfic. He’s never shown any real interest in writing anything, to be honest. (He has many computer game ideas, and some of them are pretty complex, so I suspect he’s probably heading in that direction from a career perspective, but who knows.)

Right now he’s a little obsessed with the Five Nights at Freddy’s games – they’re not my cup of tea, but they don’t have to be. And last week I caught him at the computer, cranking out words. Like 2000 words in a sitting sort of words. Which for an 11 year old boy who doesn’t write, is pretty impressive. (I helped him make the cover, pictured above.)

Now, I haven’t read it. He’s pretty sensitive about people looking over his shoulder while he works. So am I, so I’m more than willing to give him his space on it. The few times I did glance at it from across the room shows no formatting at all – just a big wall of text, broken up by chapter headings. I gently made the suggestion he might want to break them up into paragraphs later, but not to worry about formatting until he’s done with the draft. (The last thing I want to do is make this an exercise – if he wants help later, I’m more than happy to work with him on editing and formatting, but derailing his creative process is not where I want to go. I’m just thrilled he’s doing something that doesn’t involve a console.)

In the meantime, I dusted off a bit of a fanfic I wrote a couple of years ago involving a pair of made up characters set in a specific world – and decided I liked them enough to put them in their own environment and see where they go.

This entry was posted in blog and tagged fanfic, rambling. Bookmark the permalink.

3 Responses to On Writing Fanfic