Inside Jokes and Updates 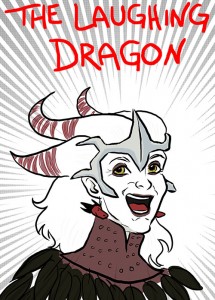 This past week I was on a panel on Humor at Authors After Dark. One of the main themes was determining how you knew something was funny or not – and the prevailing thought was that if it was funny to you, it would probably be funny to readers. (I think that’s pretty much the thing though, it’s it? I mean, you can’t make everyone happy, but whatever the concept is, if you please yourself, you’re bound to please at least some people, and that’s the goal.)

At any rate, I had noted that I tend to put a fair number of inside jokes in the Abby books – things that I’m not entirely sure other people will get, but *I* know what they mean, and it meant something for me to put it in there. 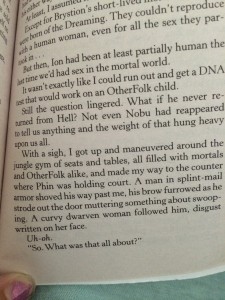 stuff herself into in Trace of Moonlight – which led to the explanation of that particular phrase (and most of the attendees and panelists had NO idea what I was talking about, but if you read comics, you might.)

But what’s nice is that sometimes the inside jokes come around full circle. Take the above picture – which was done by my friend Wenchlatte.  If you’ll notice said picture bears a resemblance to The Laughing Cow cheese logo…and it’s also quite obviously Flemeth from the Dragon Age games.

It’s sort of a random thing to draw…unless you read Trace of Moonlight, and had played said Dragon Age games – in which case, some of those inside jokes suddenly 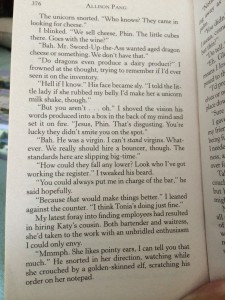 become very obvious. (Which is sort of how I wanted them – just little nods to friends and the fandoms I’ve been a part of over the years – it’s what I was playing at the time I was writing the books, and why not, really?)

Even though I didn’t actually mention Dragon Age, per se…I did have Aimo’s Warden & Alistair waltz on through and ask for aged dragon cheese, because I’m ridiculous like that.

At any rate – Wench thought this whole exchange was very funny and drew me the above picture because she is awesome. (And I have a large enough version that I may end up putting it on a shirt or something because I’m rather tickled by it.)

Inside jokes aside, I did have additional news – mainly that the Abby books are going out of print (which unfortunately was not something I discovered until about a week ago, as the publisher didn’t bother to notify me, my agent OR my editor, so makes it a little hard to figure out what the next step is.) The books are still available as ebooks, so no worries there (and if you want any of them in paperback, snatch them up now because there aren’t many of ToM or SoS left at all.) I will be looking at getting the rights back as soon as I am able so that I can self-pub them with additional content or new covers or something…and with that in mind, I’m also going to look at self-pubbing a few more books in this series (hopefully, I can time it all correctly so that things come together in a nice neat package.)

I’ve got about 10k started on book 4, and I’ve got plans for about 2 more. Don’t hold me to that – things can explode one way or the other and I do have some other projects on the burner that may end up having to come first, but…the plans are there and I’d really like to do it. I don’t have an exact time frame yet, but I’ll post it here once I know.  🙂

2 Responses to Inside Jokes and Updates