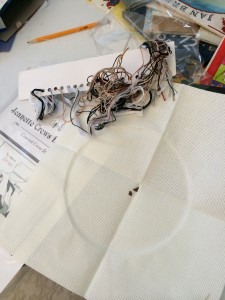 I’m not entirely sure what possessed me into thinking I might be able to teach a 7 year old the beginnings of cross-stitching.

But we’re trying it anyway.

I made some major headway with my revisions this weekend – so to reward myself I pulled out my current cross-stitch project. Which is enormous, on linen, and has a shit-ton of weird stitches, ribbon, mixed colors and blending filaments. (Think we’re only missing beads at this point, sheesh.)

Lucy watched and wanted to help, but with a project as complicated as this, I really need to focus on where I’m putting the needle – I don’t want to screw it up and be forced to undo and redo the work. (And honestly, I think I’m gonna need a magnifying glass soon – linen holes are very hard to see for me, so the potential for miscounting is very high.)

But Lucy decided she wanted to try it, so we went up and looked through my craft table to see what other kits and projects I had. (I tend to buy a lot – even if it’s years before I get to them, if you wait until you’re ready to do them and then try to buy, you’re probably not going to find it – the patterns and kits are retired and then you’re stuck searching on ebay.)

Most of my projects are too large and complicated for someone who’s never cross-stitched before, let alone a child, but we found one that is fairly simple and not too big. (It’s still too complicated for her, I think, but we’ll see. I ended up holding the hoop for her while teaching her how to count the holes and make the stitches. It’s going to take a while, but she was very proud of herself afterward. I might end up getting her a stand to hold the hoop so I lessen the risk of getting my eye poked out by an errant needle, though.)

Basic cross-stitching is essentially the act of making an X – each stitch is basically a box – you come up at the lower left corner of the box and go down at the upper right (if you leave it that way, it’s a half stitch). Usually if you have a certain number of stitches in a row, you do them as half stitches first and then when you reach the end of the row, you reverse it and come up at the lower right and down at the upper left, making the X.

Of course, there’s far more to it than that – some patterns call for quarter stitches, half stitches, back stitching, french knots, lazy daisies, mixing color strands, blending filaments, beading and all sorts of other embellishments. And of course, the pattern isn’t on the cloth at all. It’s on a piece of paper – you have to transfer it to the cloth as you go.

And there’s always problems. Whether you follow a pattern or not, threads can get snarled, you can put stitches in the wrong place, use the wrong color or break the thread completely.

I’ve done them all – I tend to pick larger projects these days because I’m a glutton for punishment. The key is to start in the middle of the pattern and work your way out. If you start out at the top and work your way down without careful measurement you risk running out of space.  I did that once, when I was younger. There is nothing quite as heartbreaking as having to undo weeks of work because you’re an idiot and started in the wrong place.

Stories are very much like this though. Sometimes you do start in the wrong place, or have a scene that doesn’t function right. And then you have to figure out if you need to restart or move it (or in the case of cross-stitch…eh, sometimes you can just sew right over it with the correction, though it’s not really recommended.)

And when you’re just starting out or working on a first draft, maybe you start out with a simple structure and basic rules. As you get more experienced or make subsequent passes, that’s when you start to add embellishments – better characterization, interesting turns of phrase, closing those plot holes and tightening those sentences.

They say the best cross-stitchers make the back look as good as the front. I’ve never been that blessed. My sewing backs look like something vomited on them – knots and snarls and places where I should have made my stitches tighter.

But I don’t really care. As long as the front looks good, the observer will probably never know the frustrations and efforts that went into its creation.

This entry was posted in blog and tagged cross-stitch, editing, Lucy, metaphoric crap that is supposed to mean something deep but probably doesn't, writing. Bookmark the permalink.